A Change of Plans...

As much as I really wanted to run my 10 miles this morning (or at least walk them) my ankle was not back to 100%. It wasn't even in the high 90s. So I decided to be a good athlete and take a "running rest day". It wasn't a complete rest day because I went to the gym instead.

I absolutely loved the motivational messages that were posted around the gym this morning... 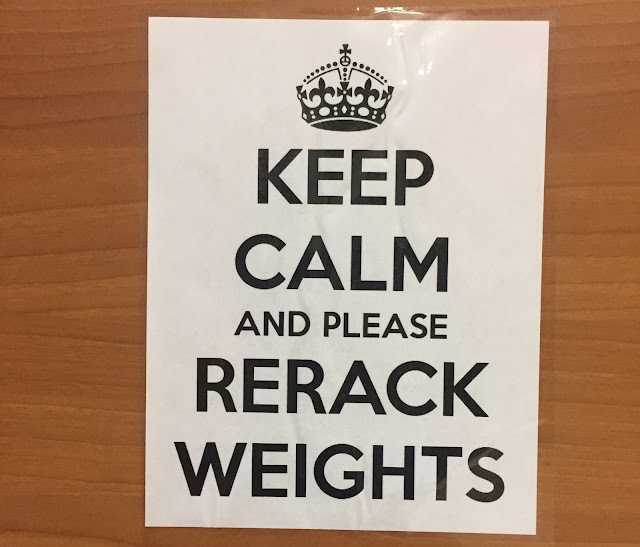 I was calm... but I don't use free weights so that was probably why ;)

For example: one of my friends (who I absolutely love, adore and cherish despite the following...) said "Since you're running 5 miles non-stop now, maybe you should run 2 miles before you take your walk break during your long runs"

source
I almost replied "What? I can't hear you? Hello?? Can you hear me now?" but I didn't.
(I was close though)

So I've accepted the challenge and I'm going to try and establish a new normal for my cut-back (or taper) long runs, just like I'm establishing a new normal for my mid-week runs. Since I run 10 miles on Sunday I will attempt the 2 mile:1 minute ratio then (as long as my ankle permits).

I spend a lot of time obsessing over researching various running related things. A recent addition to my list of running "research topics" has been running shorts. I'm new to the world of running shorts because (like most women) there are areas of my body that I typically prefer to keep covered. My legs are one of those areas...

source
While I have gained a lot more confidence and most some of my body image issues have subsided since I started running, my recent gravitation towards running shorts has been necessitated primarily by the insane S. FL weather (like the >80% humidity levels). Heat and humidity don't work well with being all covered up. In fact, I found some pretty standard recommendations for how you should dress for your run based on the temperatures outside...

I wasn't sure how my body would feel for my run this morning. I woke up with a bit of apprehension because I've been feeling an intermittent popping sensation in the back of my right ankle since my run on Sunday. At first I didn't think anything of it because it wasn't painful or bothersome (just noticeable). On Monday it was infrequent but still there. And yesterday morning I woke up and it was happening more often than not (sigh)...

source
I had both ankles wrapped yesterday and while they were wrapped I didn't feel the popping, but once they weren't wrapped it was noticeable again. In my effort to be proactive with my injury prevention I already scheduled an appointment with my Orthopedic Surgeon for next week. Until then my plan is was to adjust my training based on what my body is telling me...

The stillness of the water in the pool this morning was the perfect contrast to my state of mind... 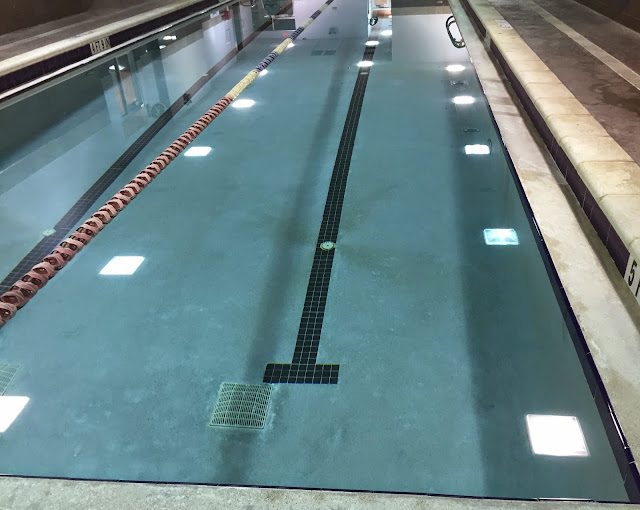 Aqua therapy was exactly what I needed

I think I'm beginning to love swimming almost as much as I love running. Almost.
You know you're a swimmer when... 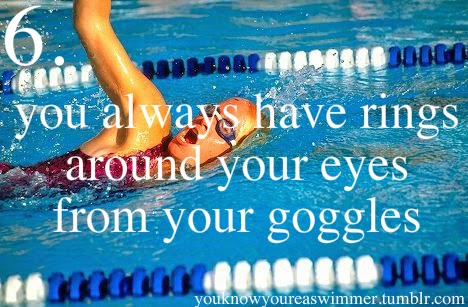 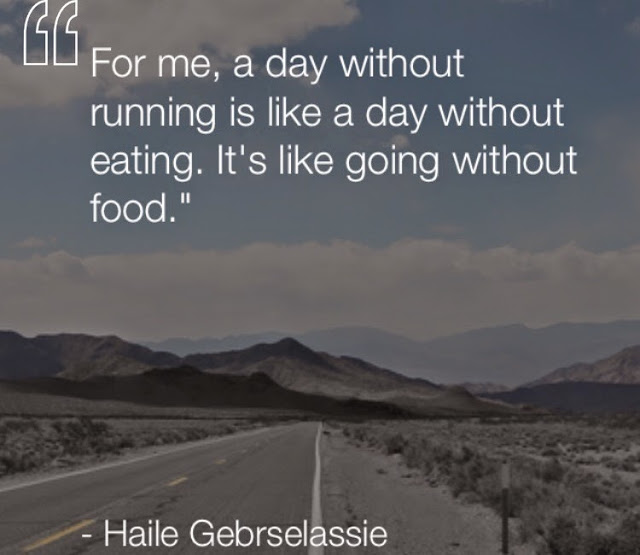 I definitely wouldn't starve today because I RAN 15 MILES THIS MORNING!!!! I'm so excited and proud of myself. That's the longest distance I've done. Ever.

I Made History Today!!!

I Bet I Sweatin' More Than You! 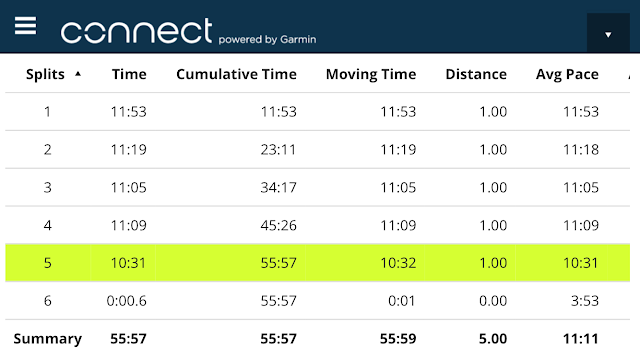 I'm really happy I was able to keep my pace within a desirable range...

And my cadence was within a desirable range as well...

{I wonder how many people clicked on the blog title thinking this post was going to go in an entirely new direction? Hmmm...}

A while back I posted that I was going to implement a new bedtime for myself (read all about it HERE). It isn't going well. The bedtime still exists, I just find myself distracted with a million things and as a result end up going to bed way past it.

And of course the likelihood that I will skip my gym workout is directly proportional to how late I stay up the night before. Needless to say I was up late last night (blogging and reading other blogs) and completely skipped the gym this morning... 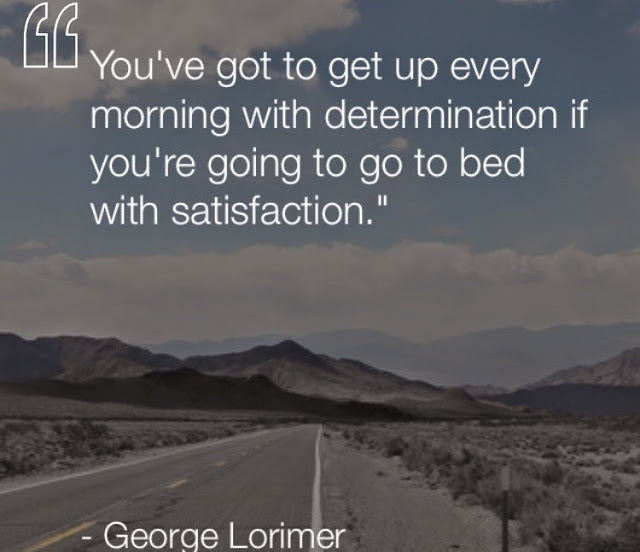 Do You Believe In Magic?

The Jeff Galloway training plan recommends doing a Magic Mile (i.e run one mile non-stop as fast as you can) every couple of weeks or so throughout your training. Based on your Magic Mile time you can determine your min/mile pace for longer distances...

Which puts me at (a little less than) a 12min/mile marathon pace. Which works out to a marathon finish time of (approximately) 5 hours and 15 minutes.  My "inside my heart" goal is to be sub-5 hours; but for my first full marathon I know it's probably not realistic to go into the race with rigid time goals.

I completely overslept this morning! I had these amazing plans to be up early so I could start my LR by 6am (6:15 the latest) and be done by 8/8:30. But I snoozed my 4am "get out of bed" alarm. And I think I just kept snoozing it over and over again because I didn't end up getting out of bed until 5:30...

The Milepost quote for this morning was the perfect motivation I needed... 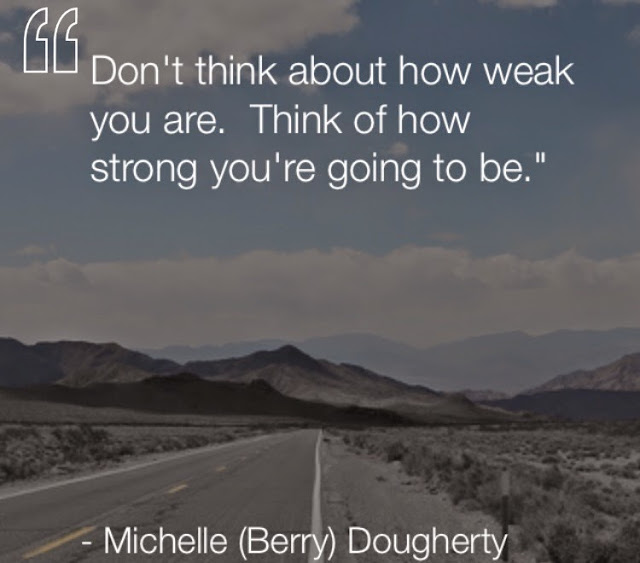 In Thirty-Five Words or Less...

BEST. BIRTHDAY. EVER!!!!!
My birthday week is coming to an end (sadly) but I had the most amazing 35th birthday! The past week has been busy and so I've been kind of M.I.A. from blogging. But, in honor of the big 3-5 I'm going to do a day-by-day recap in 35 words or less...

Monday:
Eve of my birthday eve. Felt sad about not spending it with my twin sister. Decided to change that. Because life is too short. So I cancelled all Wednesday plans. Booked Tuesday evening flight home...

As I stepped out the door to head to the beach for my morning run I knew it was going to be a struggle. The humidity hit me like a ton of bricks! The air was wet and warm and awful :(

As I started my run on the beach the temperature was bordering on 80 degrees... 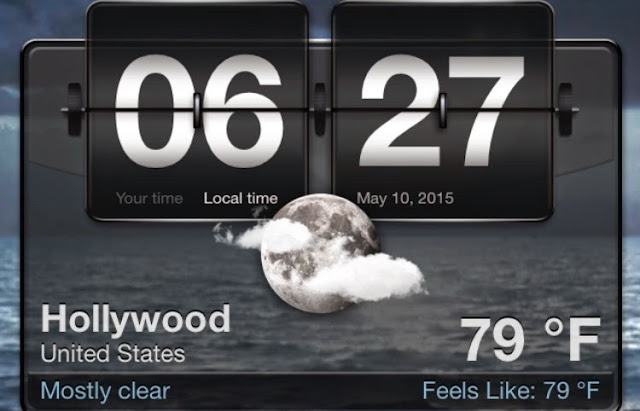 it felt so much warmer than that (the humidity will do that to you).

I gave up on trying to maintain a pace that I liked and just focused on my form...

I'm not a "spring chicken" anymore. {Disclaimer: I've known that for a while}. The past few days have cemented this realization in my brain. I can no longer go to bed late and expect to wake up early in a coherent state-of-mind. Additionally, with a late bedtime I'm less likely, or rather (if this past week is any proof) not going to wake up and do any early morning exercises. Skipping my workouts because I'm exhausted is not going to help me prepare for my marathon, which is in... 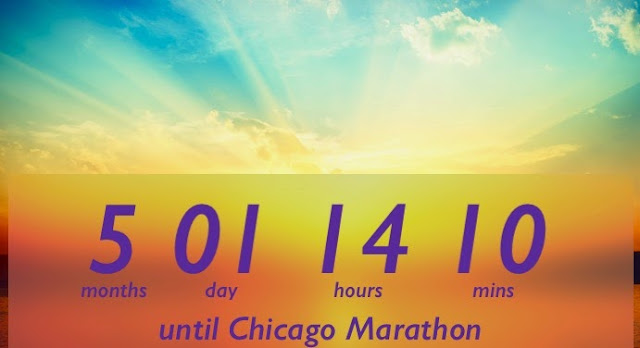 So I'm instituting a new bedtime of 8pm, which will hopefully mean I will be asleep by 9pm (sometimes it takes a while to turn off my thoughts and just relax). I went to bed late on Thursday (through no fault of my own) and woke up late on Friday. Not only did I miss my window to complete my morning run, but I was also in a very bad mood (does that happen to anyone else when you miss your run?). Annoyance and fatigue are not the best combination.

What are you training for?

"I'm always training... that doesn't have anything to do with whether or not I'm registered for a race"

I'm a planner. I've always been a planner, but as I got older the need to have a plan became more and more important. I'm not just a normal "let me try and give my day/week/month some structure" type of planner though. I'm a "this is my training plan for the next 18 months therefore that family vacation we want to take has to have a running route because I'm scheduled to do 12 miles that Sunday" type of planner.

I know what you're thinking (probably out loud) but the silver lining is that I'm somewhat flexible with my training. So if I need to do the "12 mile run" the weekend before then I'll adjust my training plan accordingly. At least I didn't cancel the trip right?

A few months ago I was talking to one of my running friends about training. We would occasionally train together although she and I have very different race goals. She likes the obstacle course races, while I very much prefer not to crawl through mud. Ever.
Anyway, she asked me (something to the effect of) "When does your training (for Chicago) start?" To which I replied "I'm always training" 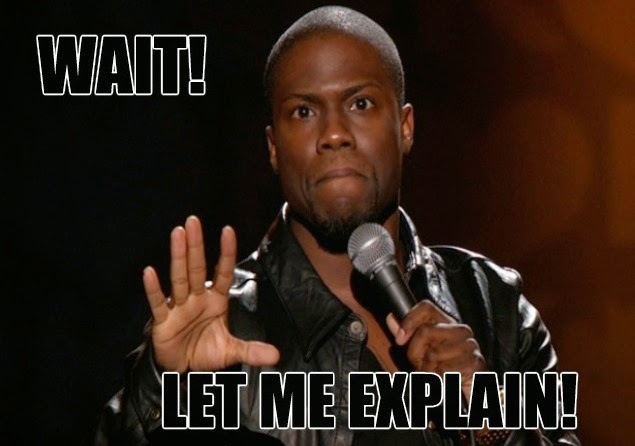 source
Read more »
Posted by This is my faster! at 7:54 PM No comments:

This week is Nurses Week! So the hospital where I work had a "Dessert Extravaganza" for all the nurses... 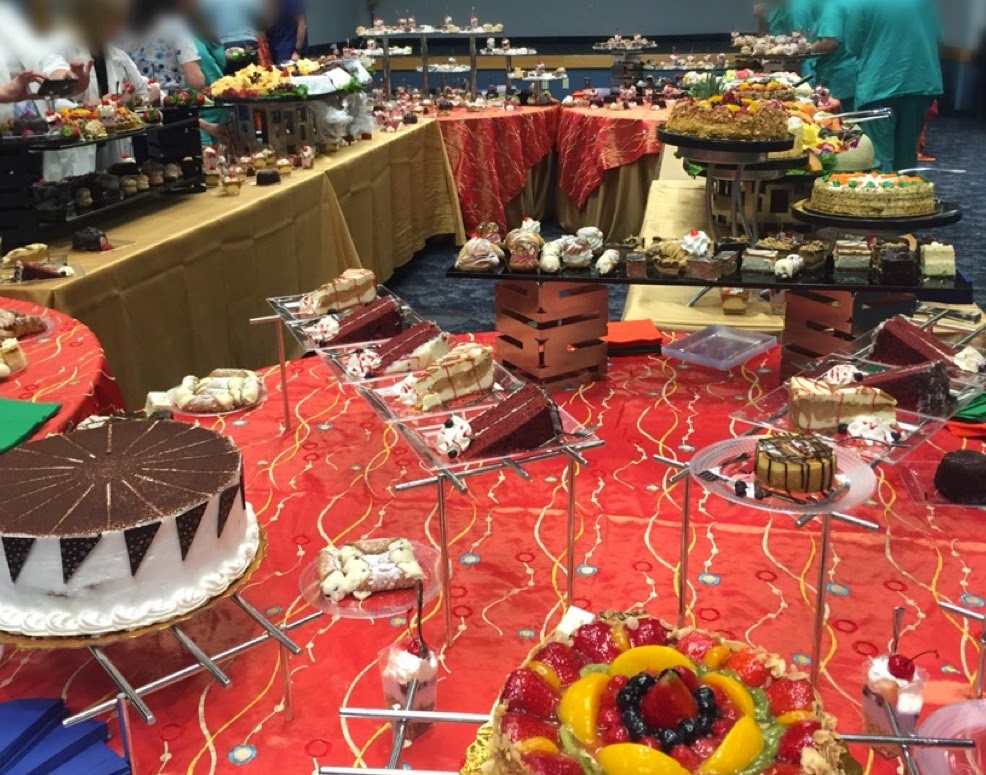 A close up of the decadence... 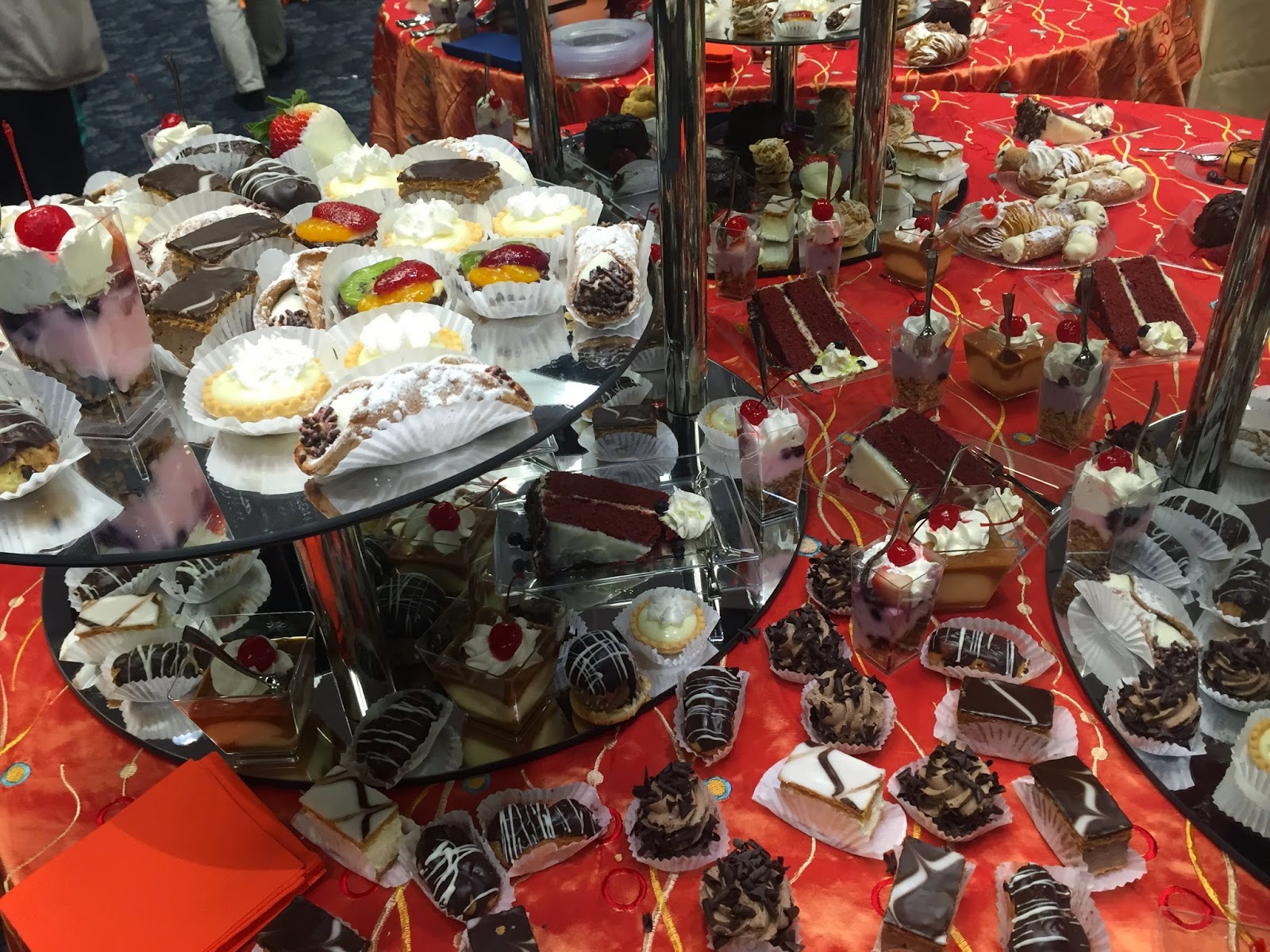 This was just a small sampling of a truly extravagant event. I only nibbled on some fruit and a small tiramisu, but it was nice to enjoy the festivities with my fellow nurses.
Read more »
Posted by This is my faster! at 10:24 PM 2 comments:

Elevation Insanity & The Strength Within...

So this happened today...

I'm only doing the Half Marathon but for some reason the "Congratulations" doesn't clarify. I wonder what it would say if I had signed up for the 10K?

I'm only doing the half for three reasons:
1. The race is in July and there is no way I would be ready for a full marathon by then.
2. I want Chicago (the city of my birth) to be my first full marathon so I'm not going to run a full before Chicago in October
3. The elevation for this course is insane....INSANE! 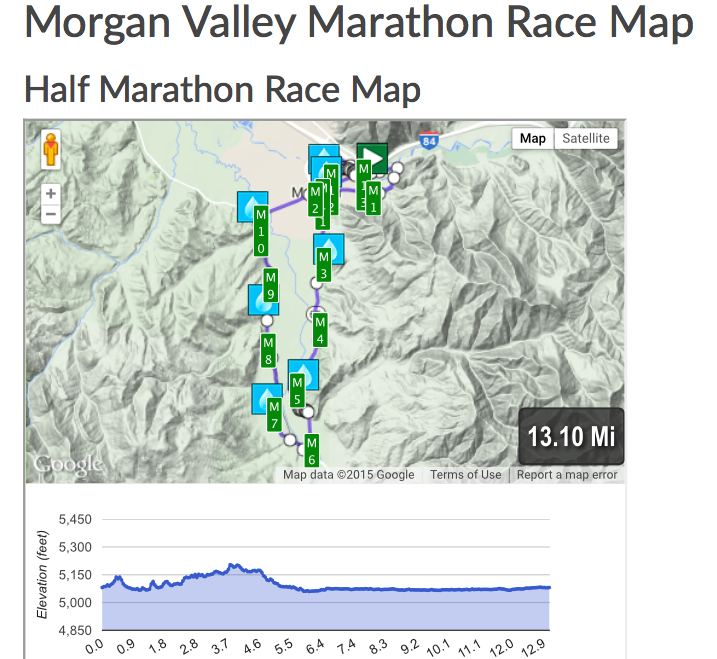 When the World Runs Together... {2015 Wings for Life #WorldRun Race Recap}

Today was the 2nd Wings For Life #WorldRun !!!

Wings for Life brings together over 70,000 runners, in 35 locations (in 33 different countries), on 6 continents across the globe, all starting at the same time and simultaneously running together for those who can't.

In my typical "early bird" fashion I got to the run at an insane hour...

...and took advantage of the 3 hour wait until the start by attempting to take a nap... 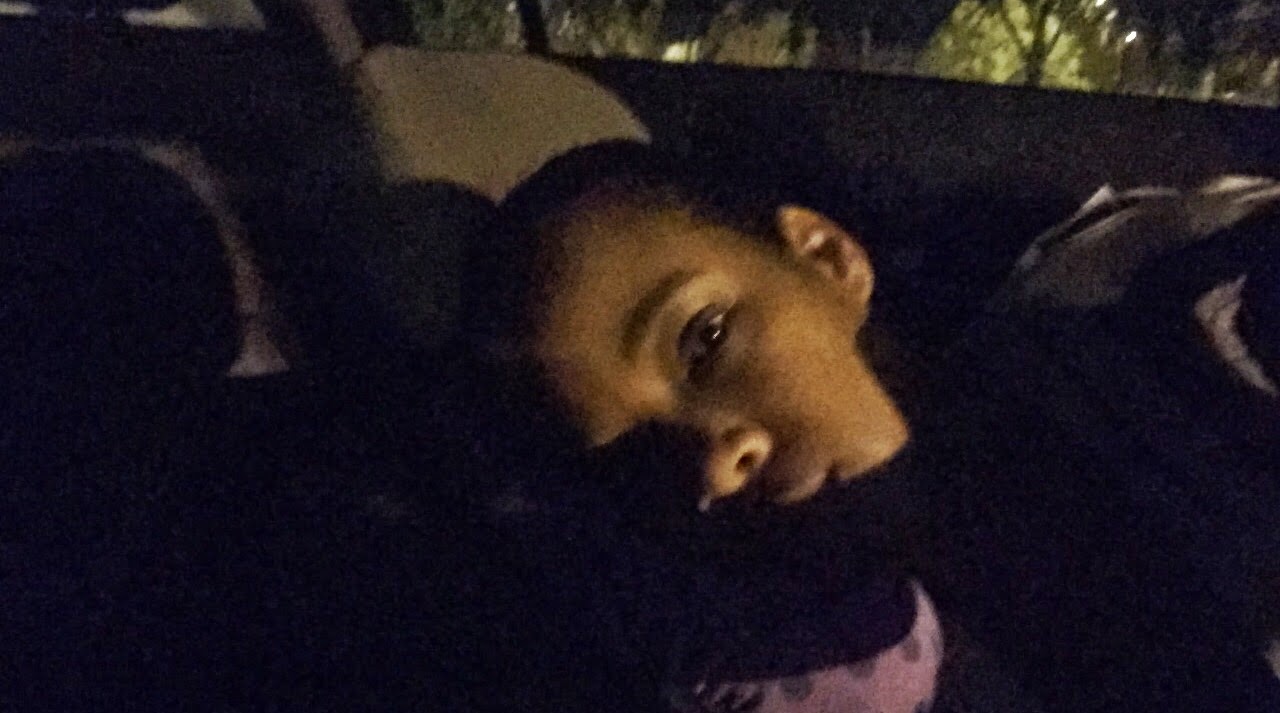 I think I broke my muscles :(

I think I broke my muscles. My entire upper body is sore from my Push-up Challenge and it's only Day Two. I've been working on trying to get the proper form since Monday, but I still can't do them properly. I found a few tips on push-up progression online today... 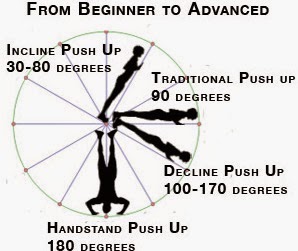 My brother suggested that I do upper body weights at the gym to help build-up my arm strength. He also (along with EVERYBODY else that I asked for help with push-ups) suggested that I do the modified ones on my knees because I am, as he gently put it, "struggling to do them".

But I don't want to do the modified ones. I want to do the regular ones. So I'm having an internal temper tantrum about the whole thing. Maybe I should start with the incline push-ups??? I barely got through my attempts at 4 regular push-ups today (I've attempted 3 times), so I'm giving my broken muscles a break until tomorrow.

The Year of the Full: Chapter Five - The Time Has Come!

Today marks the start of my training for the Chicago Marathon!

source
I can't believe it's here! I've been so anxious to start and now that it's here I'm simply excited...