When I woke up on Friday morning I wondered if the 2016 Miami Half Marathon weekend was going to be able to compete with last year's event. I mean, how many times can you "redefine amazing" right? It's probably not even fair to compare events from one year to another because so much can happen over the course of 12 months. But (fair or not) I did the comparison anyway and I can safely say that history repeated itself in amazing and incredible ways.

As promised, I tried to post regular updates to my Instagram account but I know I didn't capture all the great things that happened during the race weekend. So I decided to do a two-part race recap: one dedicated to all the pre-race activities and another post dedicated to race day.

After spending Friday morning contemplating what the weekend was going to be like, I took care of some stuff around the house and later did some cardio. I hadn't worked out all of last week so the cardio on Friday felt great and my legs (especially my quads) felt really strong. I didn't want to overdo it though so I resisted the temptation for a lot more cross training and spent the rest of the day carb loading and resting.

On Saturday morning, in my attempt to avoid issues with parking, I decided to go to the expo early. I actually got there before the expo opened so I enjoyed the wall art while I waited... 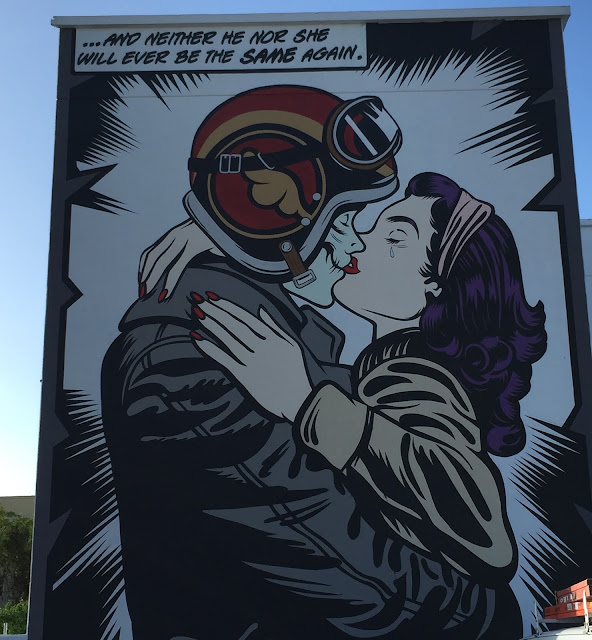 I'm such a hopeless romantic cause I really love this painting

Inside the expo hall they had the traditional list of race participants in a huge MIAMI MARATHON display... 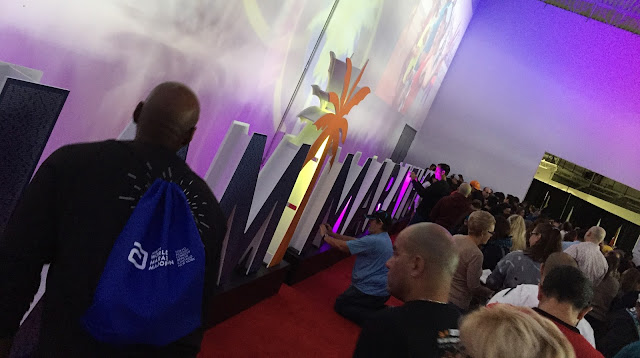 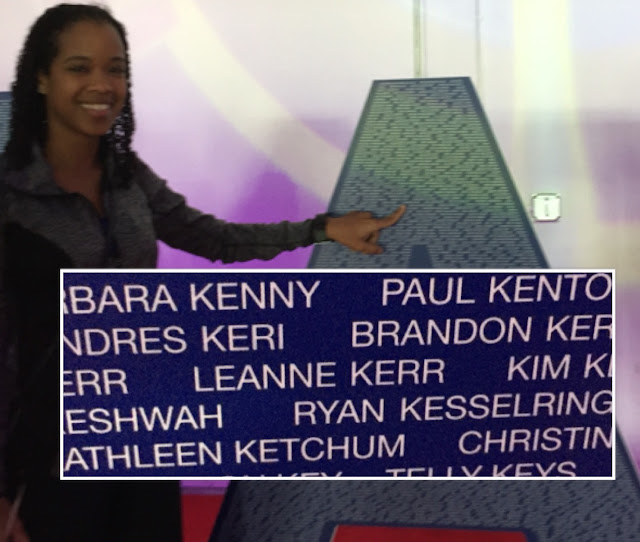 My first stop after the name display was the bib and packet pick up... 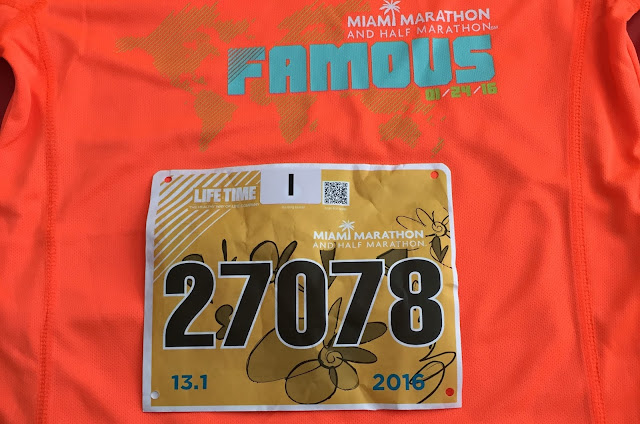 When I dropped down from the full to the half I lost all the customization I would have normally had on my bib (like my name and the JA flag)... I felt a little less "famous" after that :(

Typically, once I finish with the official stuff at race expos (i.e. getting my bib and packet) I do a quick walk through of the expo floor and then leave. This year, however, I decided to take advantage of some of the expo offerings and engaged in pre-race leg pampering courtesy of NORMATEC... 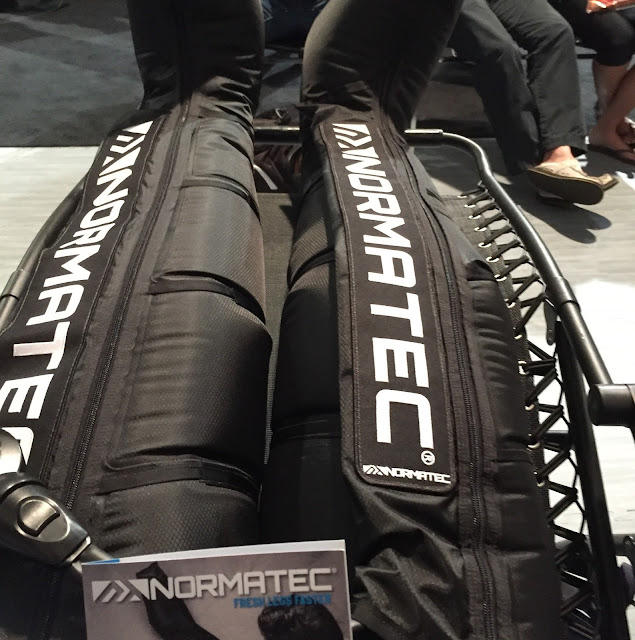 I spent time relaxing while my muscles were being soothed with air compression... 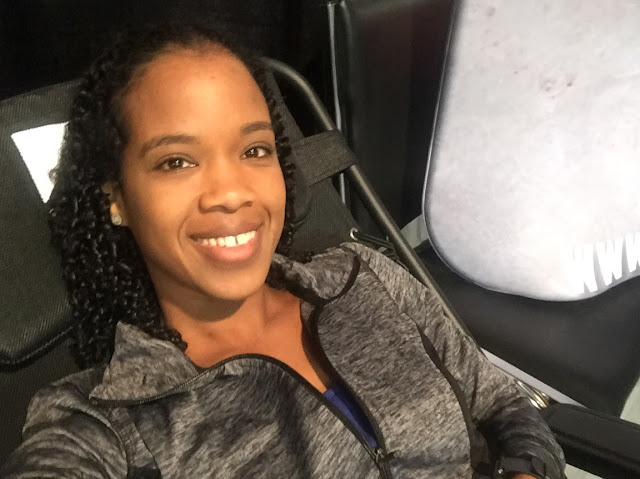 And after about 15 minutes of that I decided to explore the rest of the expo and meet up with friends. The "exploring the rest of the expo" really translated to me buying a bunch of stuff (I've finally come to terms with the fact that the only time I don't hate shopping is when my purchases are running related). Once shopping was done I found Debi, Jan (and Chris who isn't pictured below)... 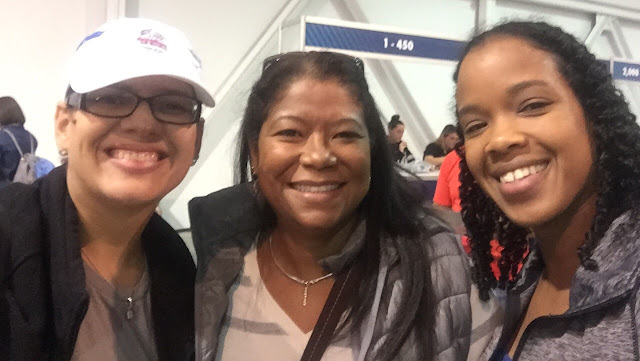 And then I left shortly after to head home and relax until it was time for the pre-race pasta dinner with some of my (old & new) running peeps from JA.

So I have to deviate from my usual moment-by-moment recap format to talk about my running peeps for a sec. I've always been appreciative of the camaraderie that traditionally permeates the running community. Maybe I've just been lucky, but my experiences interacting with different runners and running groups have been predominately positive. Apart from the occasional comment about my running form or the "In light of your pace how do you justify calling what you do running versus jogging?" question I was once asked, runners are generally nice people. It could be that we all share the same genetic mutation, or (more likely) that after running 13.1+ miles you just don't have enough energy to be rude.

The runners I hung out with on Saturday were no exception to my "runners are cool people" belief. When I was initially invited to meet up for the pasta dinner at Olive Garden I was a little hesitant (you know, because I'm so shy); but I was simultaneously looking forward to seeing friends that I've run with before and meeting everyone else... 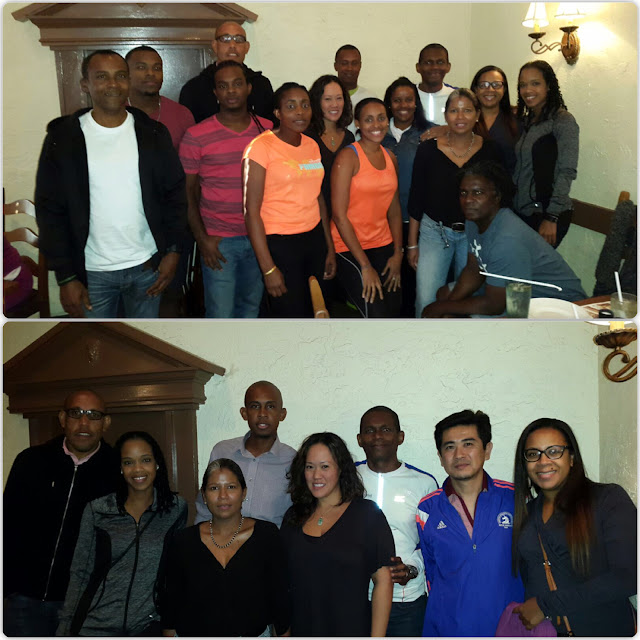 Around the Olive Garden dinner table (at various points throughout the evening) we had a number of JA running groups being represented:

I totally adopted the Pacers Running Club (@pacersrunningja) as my running group when I started running at home in Jamaica. These are my main running peeps for my training runs when I go home so it was nice to see friendly familiar faces (including Sacha and Stacy who also ran the Chicago full last October).

The Sonic Steppers were also represented... 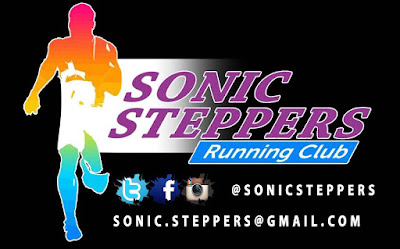 As were the Double Marchers Running Club... 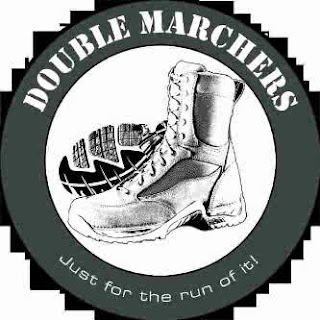 And the Flow Running Club (I don't have their logo unfortunately and they don't have a social media link... which they really need to get so I can tag them correctly... and also because it's 2016).

We spent the evening sitting around the table eating, talking, laughing and discussing pacing and training strategies with the usual pre-race day excited anxiety. This was the first time most of the runners were doing Miami (as few of us had run it before), and in particular it was the first full marathon for three of my peeps: Patrice, Nikki & Hanif.

That feeling of not really knowing what to expect for the race day distance is one that most of us have experienced at some point in our running lives. This is especially true when running in an unfamiliar environment and/or with weather that is a little chilly  kind of cold very cold. But, in spite of the "multiple-layers" race weather, they all did great the following day and successfully completed their first full marathon on the #MiamiFamous course... 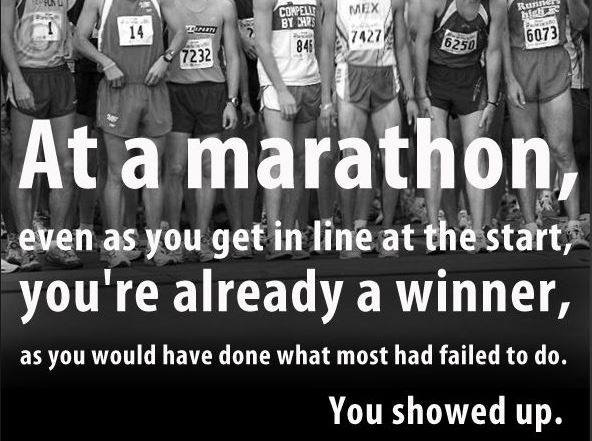 I'll tell you all about my 13.1+ mile #MiamiFamous journey tomorrow when I post part 2 of the race weekend recap. Until then...

Did you run Miami this past weekend (or have you run the event before)?

How did you feel the day before your first full/half marathon?

What's your favorite pasta/carb loading meal?
Posted by This is my faster! at 12:51 AM