Currently I rotate between two different brands: Brooks and Hoka One One. I started with Brooks way back when I started running (a magnificent 32 months ago) and was pretty confident that Brooks was going to be my brand for life. I even had these grand dreams of becoming a Brooks brand ambassador and travelling the world speaking at expos about how amazing their running shoes were...

Since my hip injury I've been running in Hokas for my long runs (and even some of my shorter runs). I'm developing the same complex with my Hokas that I have with my CW-X compression pants: I think I'm going to have pain if I don't run in them.

I have two pairs of each brand that I'm rotating through and the shoes are about as opposite as they can get for running shoes. The Brooks I have now are light weight trainers (or at least that's what they tell me), and the Hokas are… DEFINITELY NOT THAT! 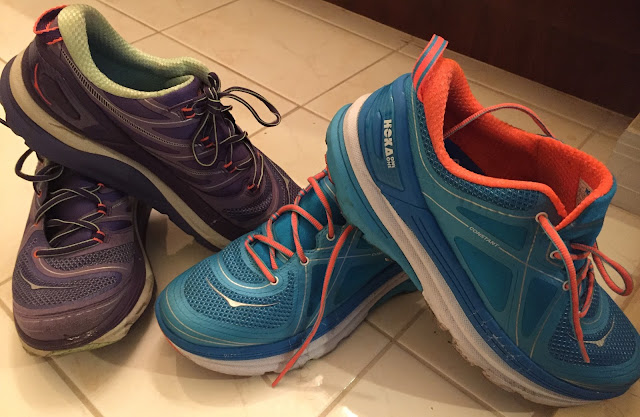 They provide a lot of support and cushioning. A LOT. Which isn't a totally bad thing because that's what my hip (and knee) need for recovery right now; but it does mean that the shoes are kinda of very bulky. Normal runners would probably be able to deal with that without an issue. I, on the other hand, find it to be a challenge because I trip over my bulky shoes all the time. To be fair, I trip over my own two feet even when I'm not wearing the Hokas so it's not entirely their fault, but they certainly don't help. There is also a mental side to running in the Hokas. I tend to think that because of the cushioning I won't have as much pain, but on the flip side I'm not as conscious about the heaviness of my foot fall in them (i.e I don't try to run "lightly"…to be honest I'm not even sure I know what that means).

I love my Brooks because they make my feet look cool… or at the very least they don't look as bulky ("cool" might have been a stretch). Plus they feel a lot lighter and are closer to the ground so I don't feel like I'm as prone to tripping in them... 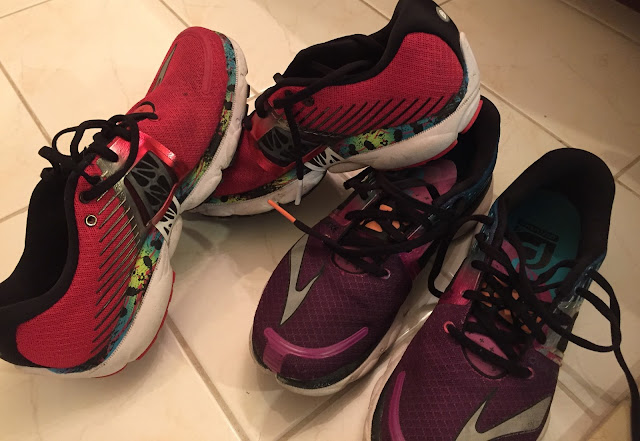 That being said, I was wearing my Brooks when I fell in August soooooo there might not be much logic to that train of thought. I'm still a Brooks girl at heart though. I hope that one day my joints and running gait/form will transition toward "normal" so that I can run in light weight trainers all the time (#wishfulthinking). In the meantime I'll continue my running journey with the Hokas as my primary shoe choice because the last thing I need right now is additional joint pain.

What brand(s) of shoes do you run in?

How many pairs of shoes are you rotating now?
Posted by This is my faster! at 7:37 PM