I was doing a routine scroll through my Instagram (IG) feed the other day and came across a runner who was lamenting about the "excruciatingly slow" pace of his last run. It was around an 8:30min/mile pace. And he was "devastated".

I totally get it. I would be devastated if I ran an 8:30 pace too; since the only way that would happen is if I died... (and then got reincarnated and came back as a fast runner)

source
On some level I understand not being excited about how you performed on a run. I mean, if you normally run a 5-6min/mile pace then 8:30 will feel slow. I'm just not sure "devastation" is a necessary emotion for anyone that runs a sub-10 minute mile (unless you're a professional/sponsored athlete at risk of losing all your funding and not being able to feed your children...or buy new running shoes).

I mean, no one wants to run slower. The goal is always to get better right? And for some people (dare I say most people) that means running faster... 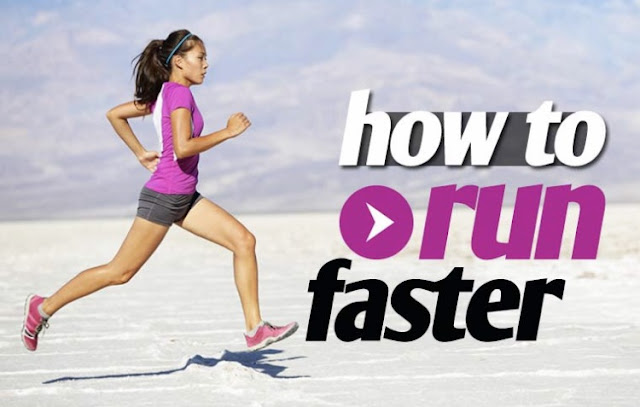 
Last year I was running between 11:30 and 12 minutes per mile and this year my current pace is a lot slower than that. So I totally understand when you don't feel like you're performing well. Granted, I've run less miles this year; the earth moved closer to the sun (hence the hell-like temperatures during the Summer); and I've approached all types of cross training with the same disdain that I have for squats (despite how important I know they are).

But when I read the IG post I couldn't help but roll my eyes and think "Really dude?" Then I spoke to a friend of mine about it and he commented that people may roll their eyes when I talk about my pace being slow. And while I seriously doubt that my current 13min/mile pace would ignite even the slightest degree of envy from anyone (except maybe those who can't run at all) I got his point: we are all "faster" to someone; and likewise we are all "slower" to someone... 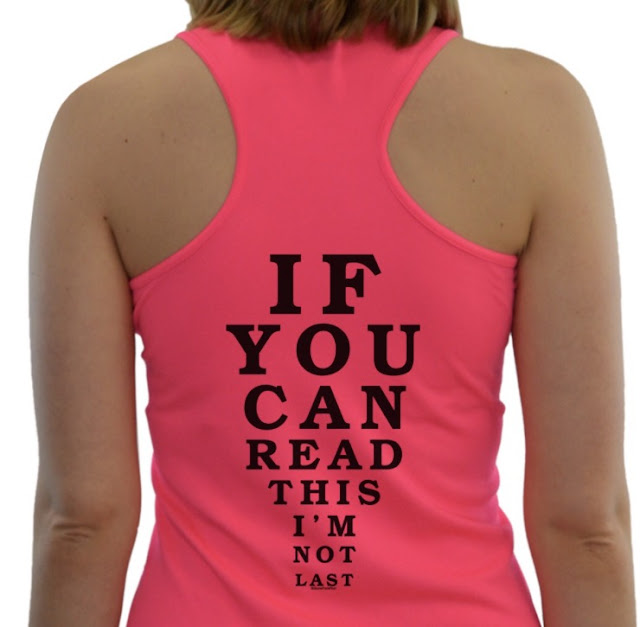 source
The Faster/Slower phenomenon permeates the running community. In fact it sparked a conversation in one of my running group chats when we received a request to join from an individual that none of us knew (or at least we didn't immediately recognize the person's name). In my usual "the glass is not only half empty but it has a crack and the remaining water is leaking everywhere" fashion I cautioned my running friends about adding someone we didn't know by giving them two worst case scenarios... 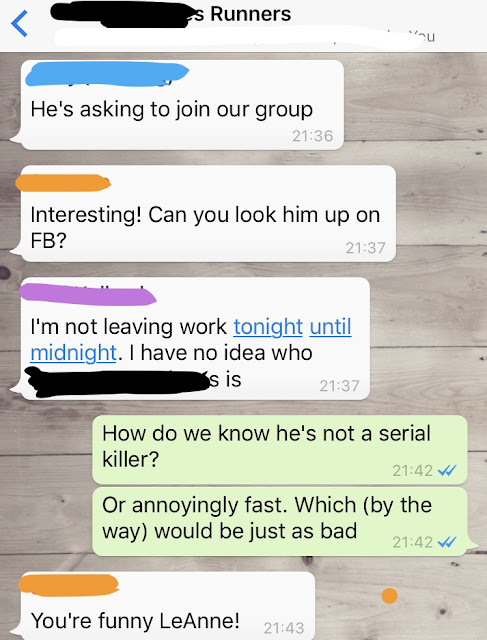 It's not that I'm intimidated by faster runners (since that would mean 99.9% of runners would intimidate me) it's just that I find the obnoxiously fast runners annoying. As a disclaimer that doesn't refer to the people that naturally run faster than me). When I say "obnoxiously fast" I mean those runners that run backwards while running beside you. Or run up and down past you while you struggle to put one foot in front of the other. Or those who (under the guise of feigned concern) constantly ask "Are you ok? You look like you're struggling". Gee, thanks.

{You know who you are. If you do that on your runs with your slower running friends I guarantee they want to stab you. They may not act on it (or act like it) but trust me on some level they do}

To be fair, in the grand scheme of things, we all benefit from the fast and slow runners in our lives. Faster runners encourage and motivate us. And slower runners remind us that we are doing better than we think... 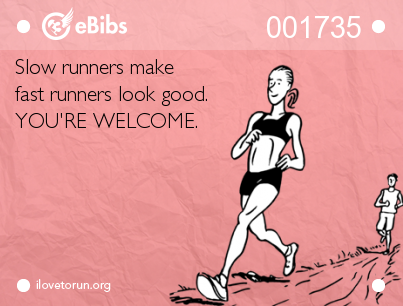 So to the IG runner that sparked the motivation for this post: Don't worry. One "slow" run isn't the end of the world. We all have days when we feel like our performance wasn't our best. So please, for the love of everything running related, don't be "devastated". The next run will be better. And if it isn't remember, it could be worse, you could be a welcomed addition to my running group with a pace that matches ours perfectly <insert a million eye rolls here>.

Do you run backwards besides your slower running friends? [please stop]

What motivates you to run faster?
Posted by This is my faster! at 5:57 PM