A Real Race Recap of the Ragnar Relay {#RagnarChi Part I}

If you throw an average runner into an anything but average running situation (like a Ragnar Relay) it can go one of two ways: horribly wrong or amazingly right. It’s never usually both right? Well, let’s find out... 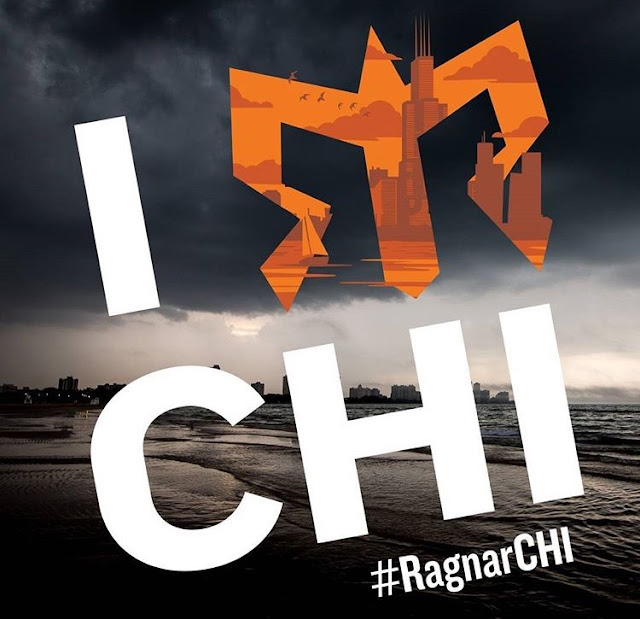 There is no way for me to do this Ragnar Race Recap without giving you a little bit of the back story on how I joined my Ragnar team. I’ll keep it brief:
I heard about Ragnar in my many searches for running events.
Saw there was one in Florida.
Tried to form a team.
The race got cancelled.
I looked for another event.
Found Ragnar Chicago.
Chicago is my happy place.
So obviously I went looking for a team.
Saw a message on Facebook about a team looking for runners.
Reached out to Nicole (team captain).
She was super nice.
She had spots.
I paid my registration fee.
Team membership confirmed. 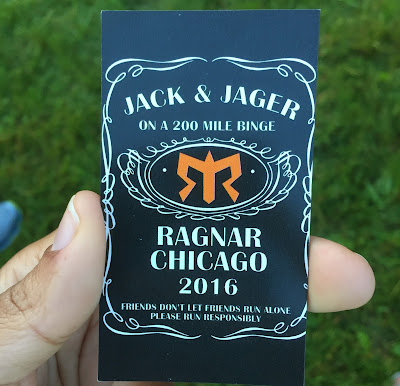 The race was from Madison, Wisconsin to Chicago, Illinois. If you’ve never heard of the Ragnar Relay it’s basically a 200 mile relay race run by a team of 6 people (for ultra-teams, aka crazy people) or 12 people (for normal sane teams). For a team of 12 runners the total distance completed by each runner is divided into three legs. Runners typically run a total of 13-20 (-ish) miles. Teams of 12 runners have 2 vans. Van 1 has runners 1-6 and Van 2 has runners 7-12. Once the race starts all the runners in Van 1 complete their first leg and then hand off so that all the runners in Van 2 can complete their first leg. Then we repeat the rotation for leg 2. And yet again for leg 3. Sound simple enough?

I got to Madison on Thursday (the day before the race started) and was picked up from the airport by my team captain (Nicole) and Van 2 mate (Carrie)... 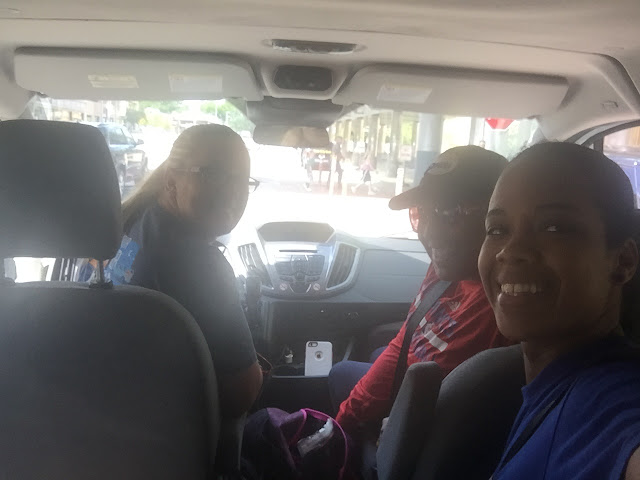 Then we went to the hotel where Nicole, four other teammates, and I were going to spend Thursday night. After we checked-in to our hotel, Nicole and I went to Carrie’s hotel, met up with other members of the team (Horst, Erin, Laura, Tonya, Mike, Mariah), picked up another member (Sammie) and went to check in for the race… 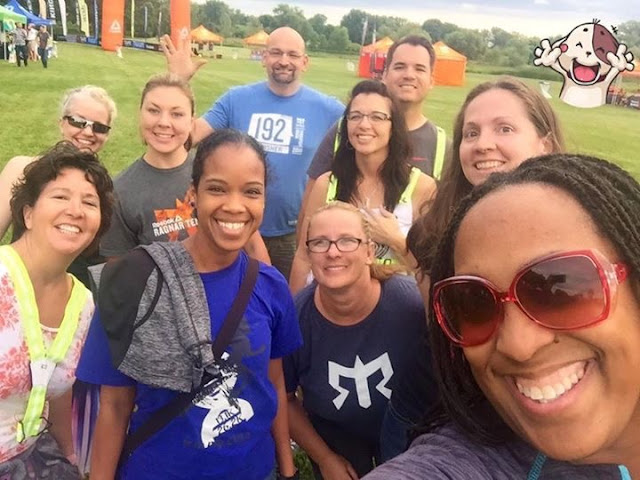 Race check-in required proof of safety gear and watching a safety video, which was pretty routine for the Ragnar veterans on the team, but new for Laura and I who were running Ragnar for the first time. As a Ragnar Rookie I paid extra close attention since I tend to suffer from navigational deficiency. I wanted to make sure I knew as much about the “how to call for help” procedures (cause you just never know when that information will come in handy). And after we watched the video we got our official team assignment... 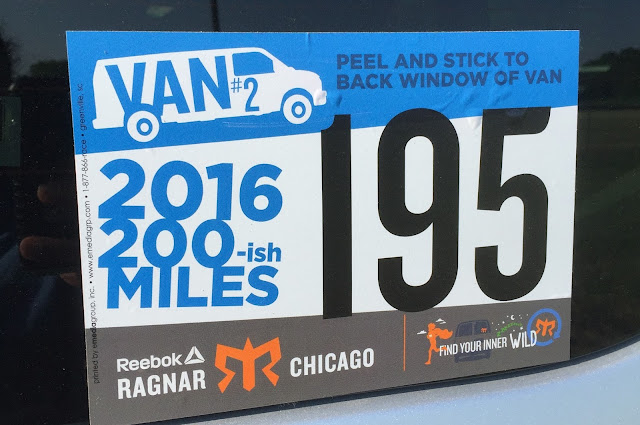 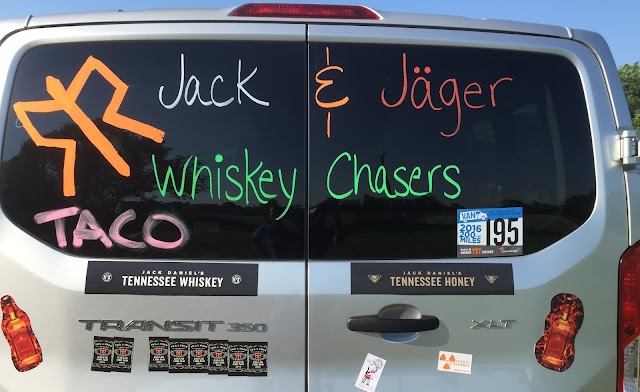 After check-in we went on the hunt for food. The best way to bring a group of almost total strangers together is over food and drinks. And thanks to the Tip Top Tavern, we were able to do just that… 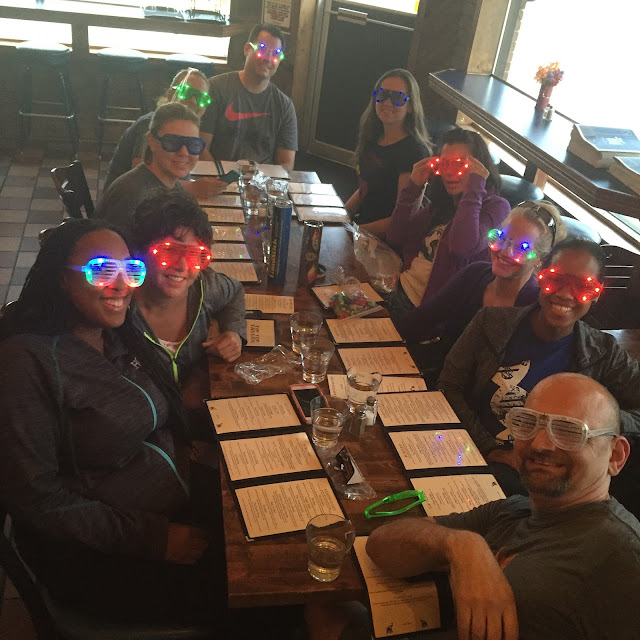 We were down a runner and missing another (Jessica), who was coming in on the following day, so our team dinner at the Tip Top Tavern also became a logistics and strategy meeting. The result of which led me to spend the following morning with the Van 1 crew, and then, right before my first leg, meet up with Van 2. It meant a long day for me, but I was able to bond with everyone that way so I actually had the best of both worlds.

Friday morning started out very early as the Van 1 crew got ready to head to the start. The event has a staggered start time with the more moderately paced teams starting earlier. Our team had a 6 am start time... 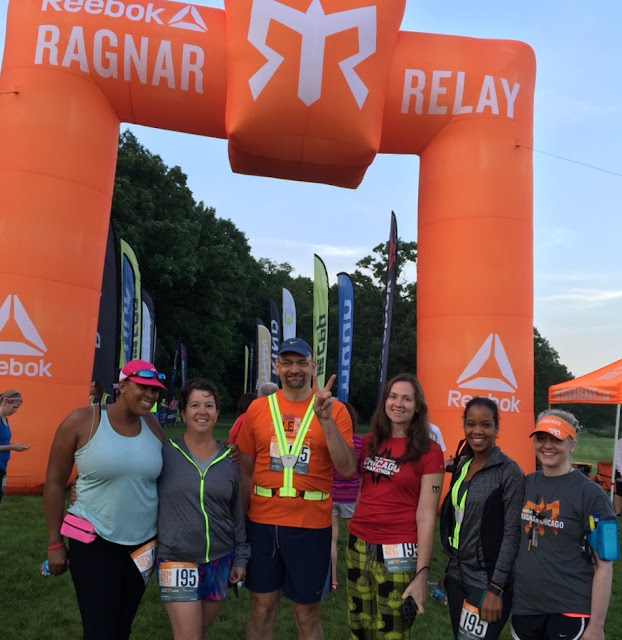 The first Leg for Van 1 looked like this: Nicole → Horst → Laura → Erin → Laura → Sammie (Laura ran two legs because we were down a runner in Van 1).

And even though I wasn't running for a while, I was still ready... 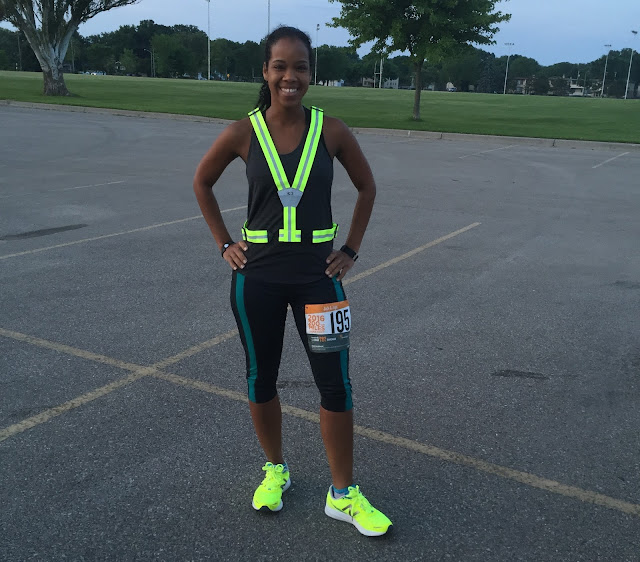 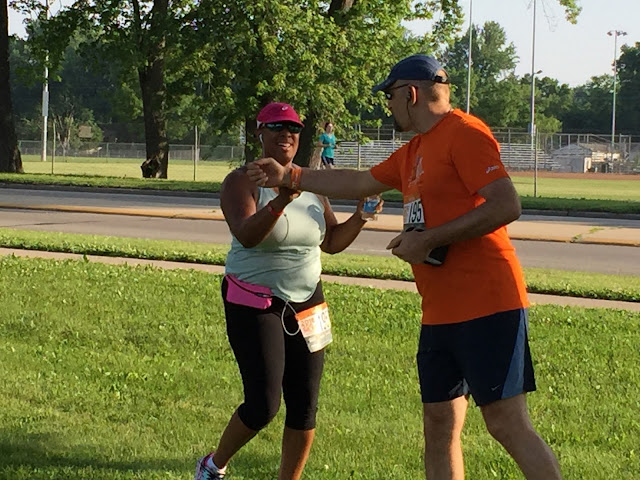 And then continued to rotate through the first legs for Van 1... 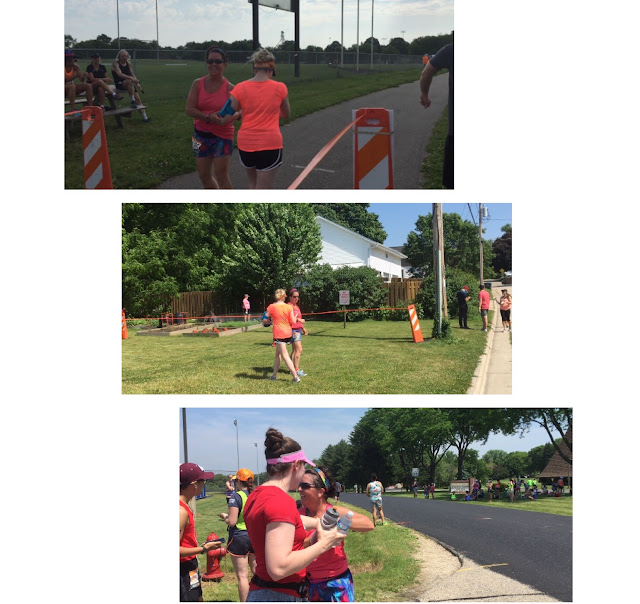 The heat and humidity was insane (and I live in Florida so I’m no stranger to ridiculous heat and humidity). We paced ourselves as much as we could and provided extra support to our runners on the course… 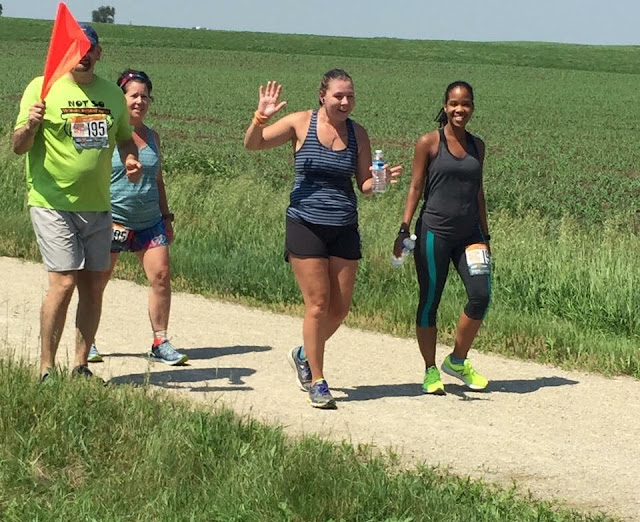 I was ready for my first exchange. I knew what the weather was like and I planned to just take my time… 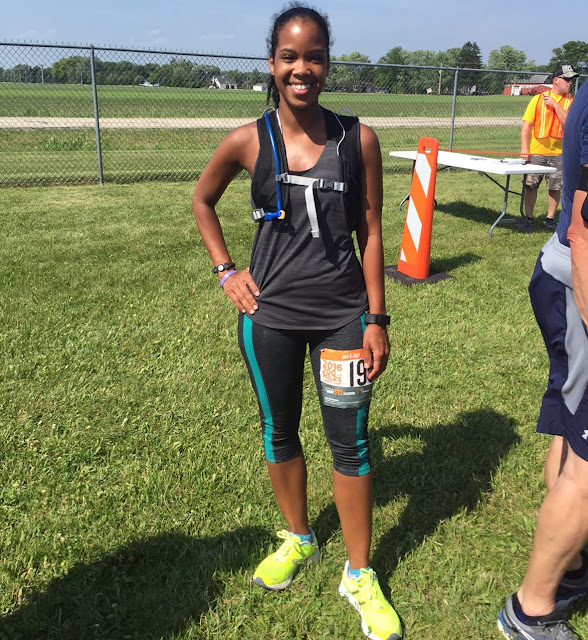 My Van 2 teammates stopped regularly along the course and gave me ice (which I placed in my sports bra) and cold water (which I both drank and poured over my head). I also got support from other teams along the way. Everyone was really great and really supportive. An hour and 10 minutes later I was finally done with leg 1... 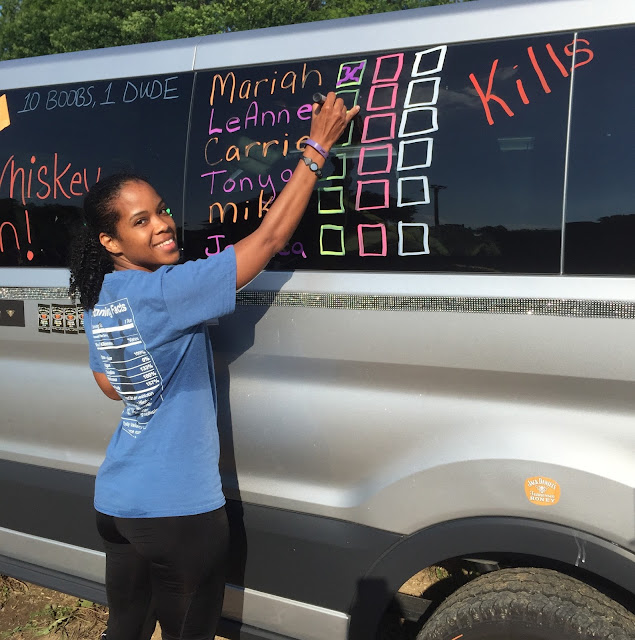 We continued to hand off to the other runners in Van 2 and once runner 12 was out on the course we headed to Exchange 12 where runner 12 (Jessica, our last runner in Van 2) would hand off to runner 1 (Nicole, the first runner in Van 1) for the start of our second legs. {By-the-way, I hope all the details about the handoffs doesn't get annoying. It's mainly for readers who aren't familiar with the Ragnar concept}

Mother Nature had a different plan and hers included heavy rain with thunder and lightning. While we were waiting for the handoff we were notified that, due to the serious weather conditions, no runners would be allowed to leave the exchange (in other words, Van 1 would not be able to start their second leg). So we waited for our runner 12 to come in. And we waited. And we waited.

Jessica was lost, in the dark, in the rain, in the woods. She didn’t know exactly where she was and we didn’t know where she was. We sent out our team "search and rescue" personnel (i.e runner 11, Mike) and we waited for an update from either of them. I don’t know about anybody else on the team but I was worried. This is how scenes in Criminal Minds start, so yeah... I was very worried.

Thankfully both of our runners returned safely and while Van 1 played leap-frog (jumping from exchange to exchange until the Race Command allowed runners to run), Van 2 went to Exchange 18 (where we would eventually meet up with Van 1 so that runner 6 could hand off to runner 7) and prepared for a “shower and sleep” session that was, well… not what I expected.

{Part 2 picks up right where I left off. Check out "We Are Ragnarians" for the continuation of the Ragnar Relay Race Recap}
Posted by This is my faster! at 6:06 PM