There is a thin line between encouragement and boasting. Recently I read this article that provided two different views on runners who offer "encouragement" as they pass other runners on the race course. The article brought to mind my experience at the 2013 iRun 5K.

Before I continue I have to mention that I thought the race was great overall. It was well organized; the race coordinators provided great mile posts (for both the 5K and 10K); the turn around spots were clearly indicated; and, because it was a relatively small event, you didn't feel lost in a sea of runners elbowing their way to the finish line. Plus....most importantly....Kai won 1st place in her age group! 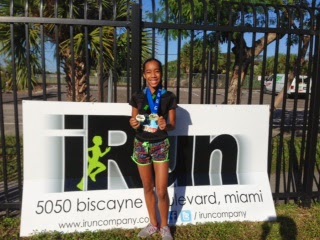 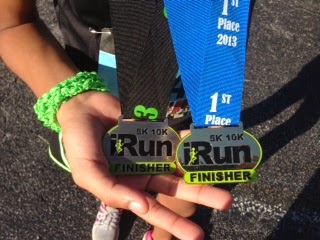 That being said, there were a lot of "professional 5K and 10K runners" at the event who were openly encouraging of each other throughout the course (yay for them). And then, obviously unable to contain their words of motivation, they proceeded to extend this "encouragement" to other runners on the track (like myself) as they ran the course again as part of their "cool down" routine. Did I mention that these were the 10K runners?! So not only did they complete the 10K (two times around the course), they also continued to run (you know...just for fun) and lapped me again while I was trying to complete the 5K. Yes, that was annoying.

It's bad enough that they were more than twice as fast as I am. I also had to endure the further insult of them letting me know the course landmarks. One of the runners said "Keep going! You're almost there! The finish line is just past the third stop sign after the white house with the blue gate, and then you make the second turn once you pass the fifth pedestrian crossing". Thanks.

Of course, I'm willing to admit that when races have volunteers throughout the course (at the water stations and turn around points etc) that shout encouragement as you pass them I am appreciative. The big difference is that they are supposed to do that. Plus, you are running past them, not the other way around. So their encouragement is actually motivating, not disheartening and "soul crushing", as Scott Martin so eloquently described in the article (link above).

The article was featured in Runners World and readers were polled to see which perspective (offering encouragement vs. not offering encouragement) they agreed with. Apparently I'm in the minority. Most readers think encouragement should be given. I am willing to concede that I run to a different cadence (literal and figuratively). I prefer to keep the unsolicited cheerleaders at a distance. I guess a good way to ensure that happens would be to run faster. But....you guessed it.....this IS my faster!

This is how I console myself... 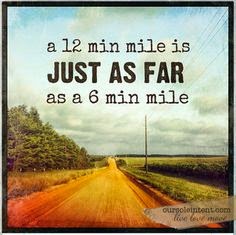 Let's hear it! Tell me all your race day pet peeves!