Lessons from the Open Water...

I'm just as much of an early bird for swimming events as I am for running events because, as it turns out, I get just as nervous for them. So even though the event check-in for Swim Miami wasn't until 7am this morning, I still got there at 5 am... and sat alone in my car in a VERY empty parking garage convincing myself that this was not the beginning of a low budget horror film.

I went to check-in at 6am (since I saw other people doing so) and got my Swim Miami shirt... 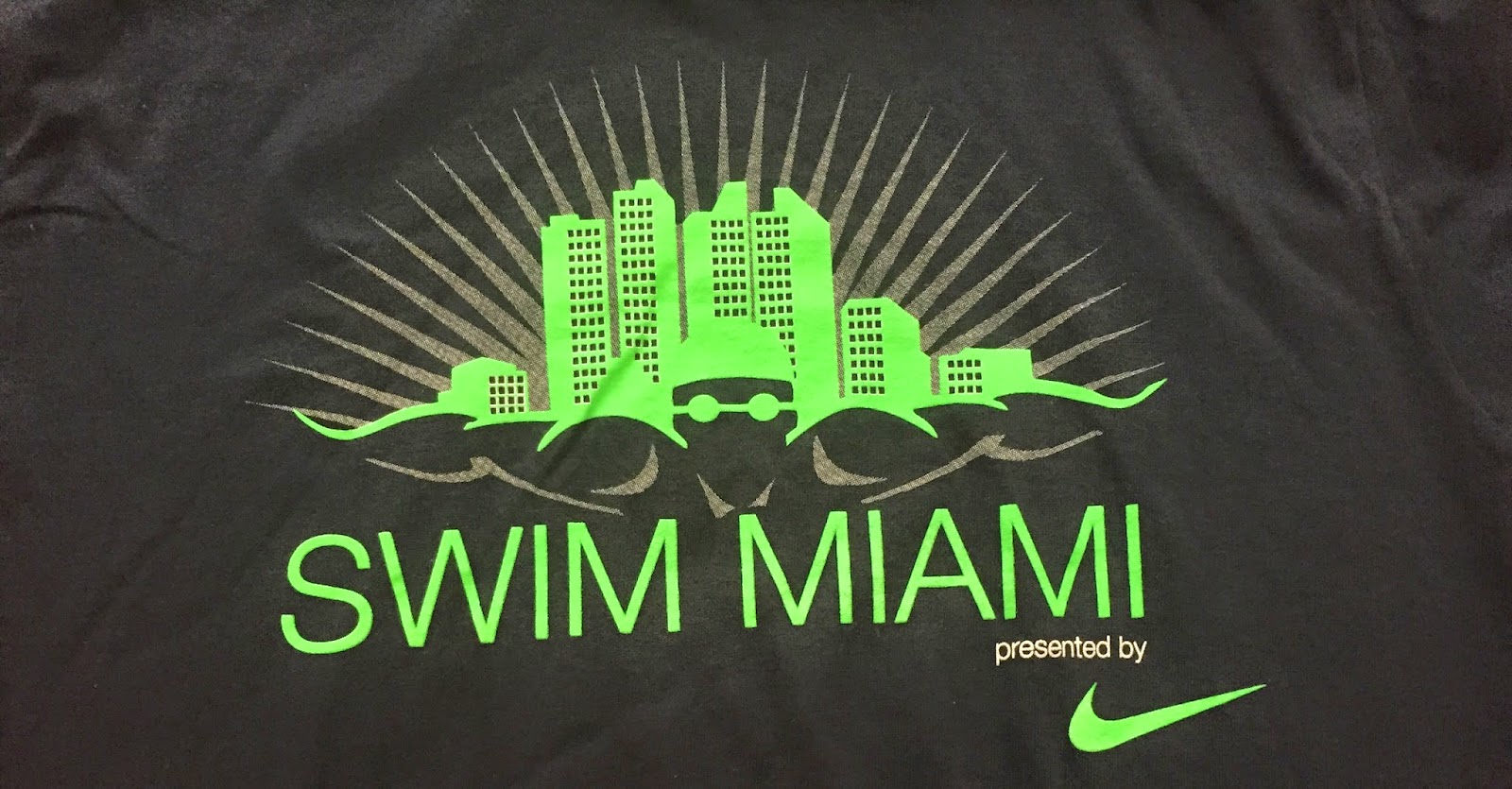 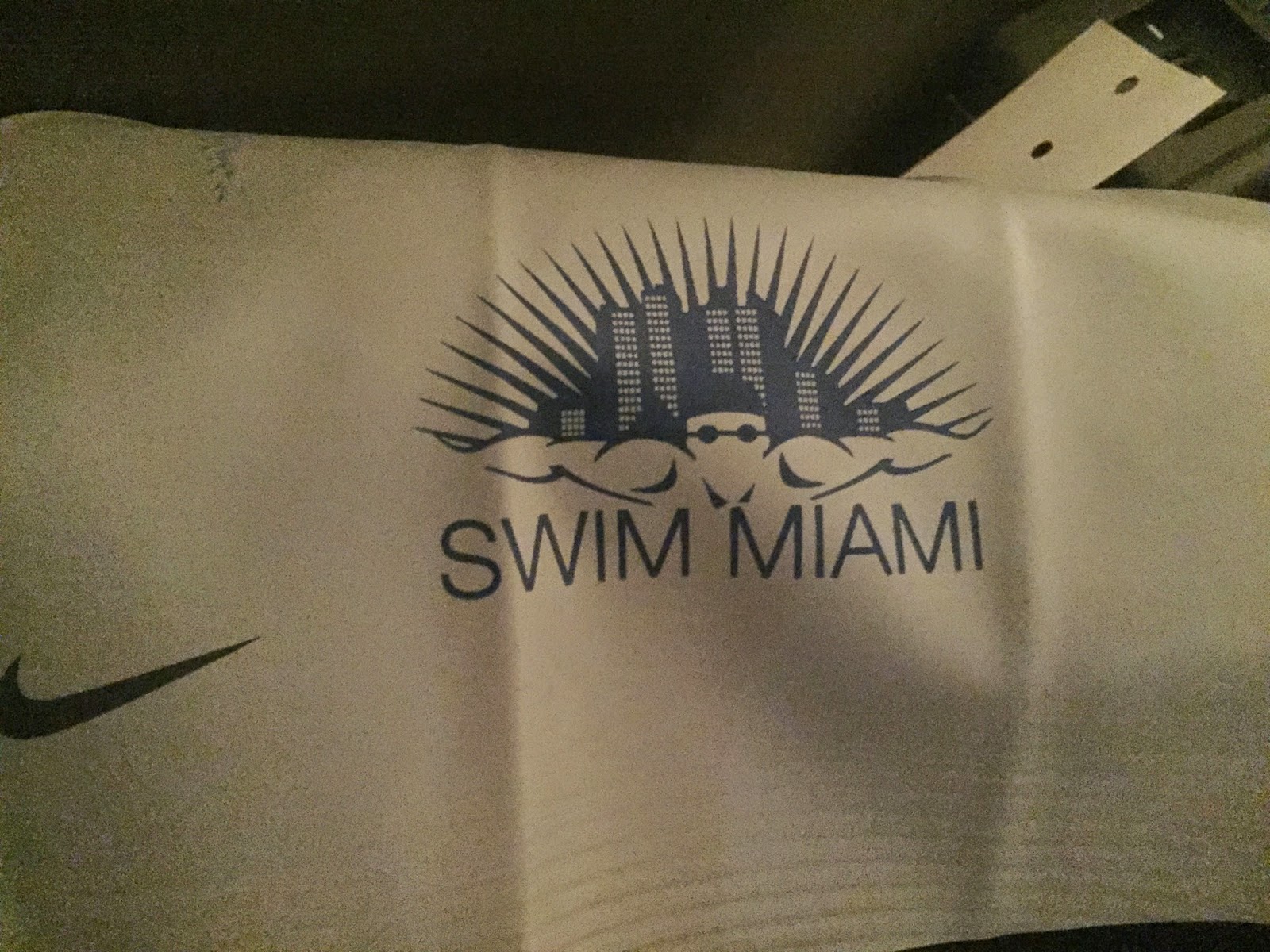 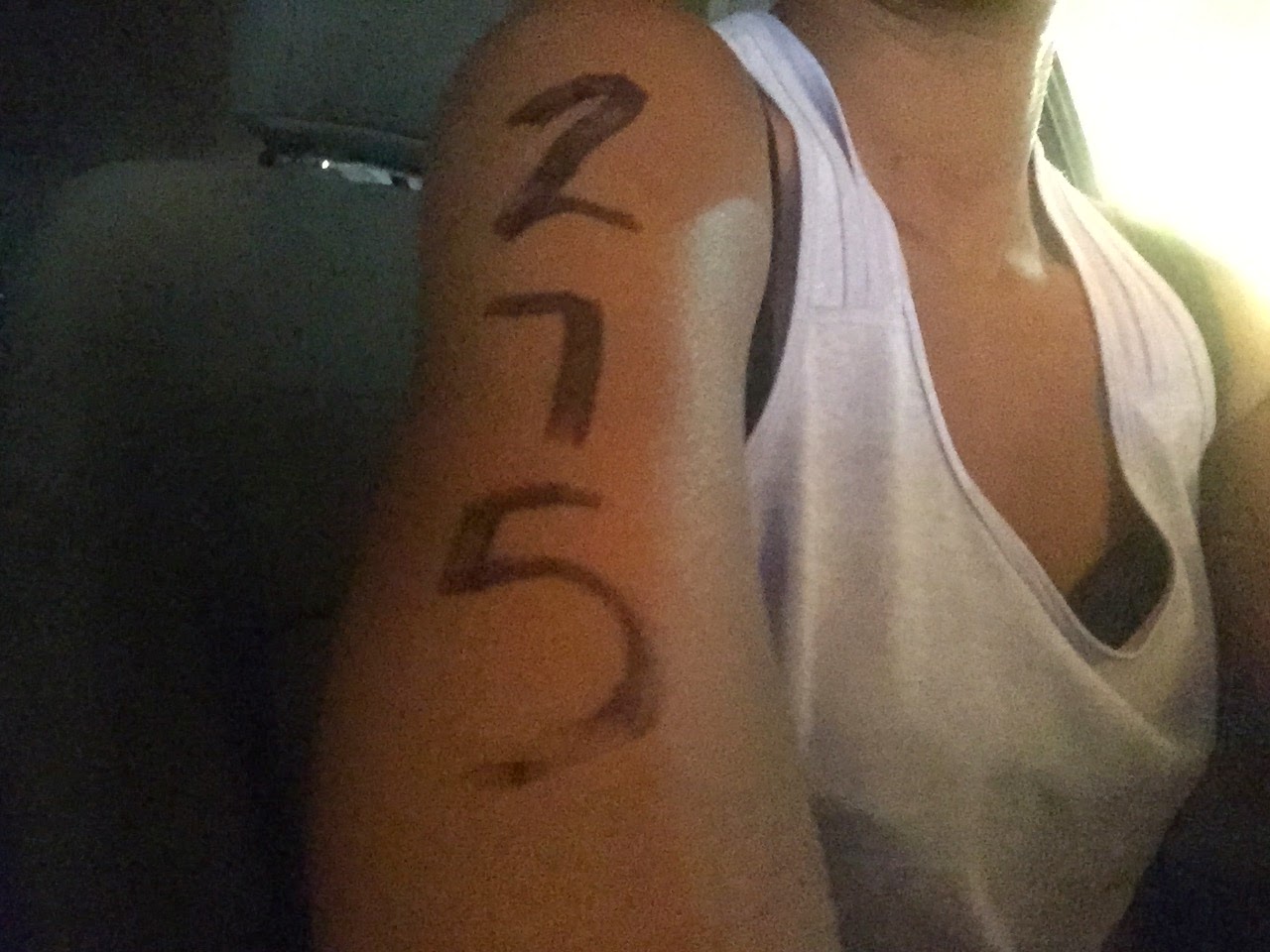 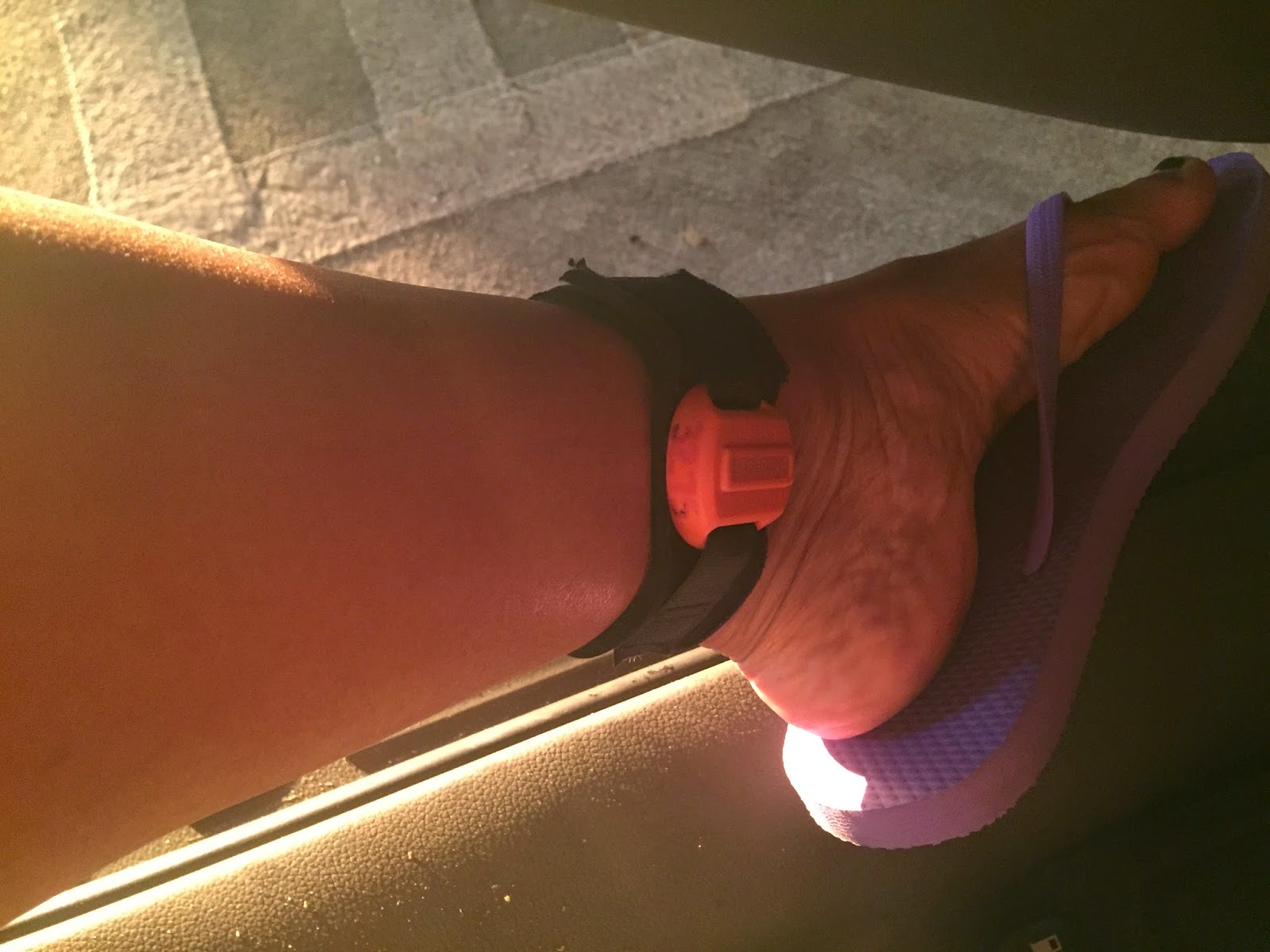 I still had quite a bit of time to kill before the event was scheduled to start so I decided to watch shows on Hulu+ and do my pre-race "get ready" activities, which really just meant putting on sunscreen. I normally don't wear a lot of sunscreen and rarely do I put it on my face, but I was at the beach last weekend and would be in the sun a lot for the swim so I wanted to err on the side of caution... which eventually led to my first lesson of the day...

Lesson #1: Wash your hands thoroughly after you apply sunscreen, especially if you have the tendency to rub your eyes. When the sunscreen on your hands comes in contact with your eyes it takes a significant amount of ice cold water (from the free mini bottles being supplied) to flush your eyes in an attempt to stop the burning. I thought I was being so smart when I got the water resistant sunscreen to use for today's event. Do you know how hard it is to wash "water resistant" sunscreen off? Very hard. 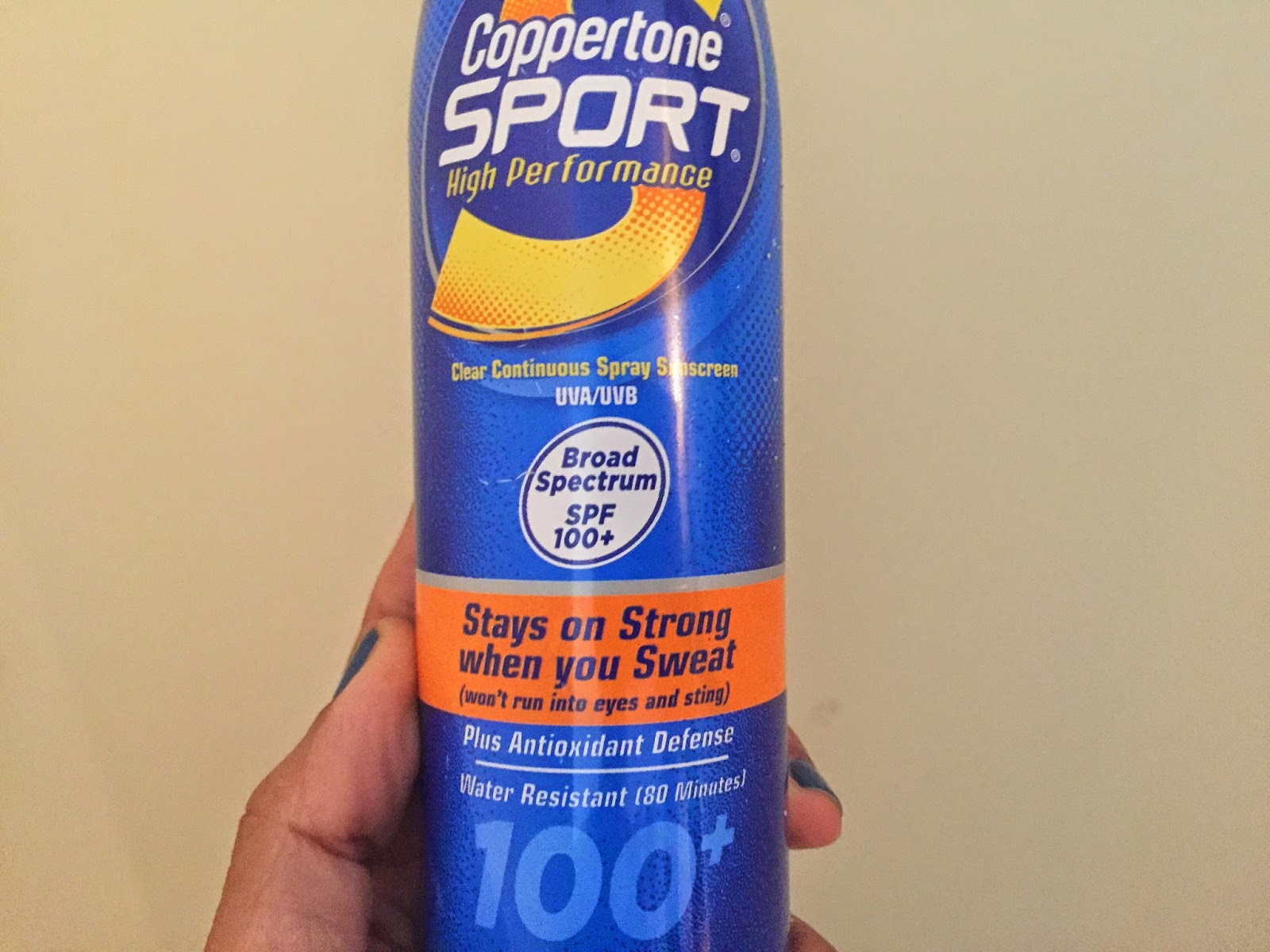 Waiting around for the start was otherwise relatively uneventful. I got to enjoy the sunrise for a bit... 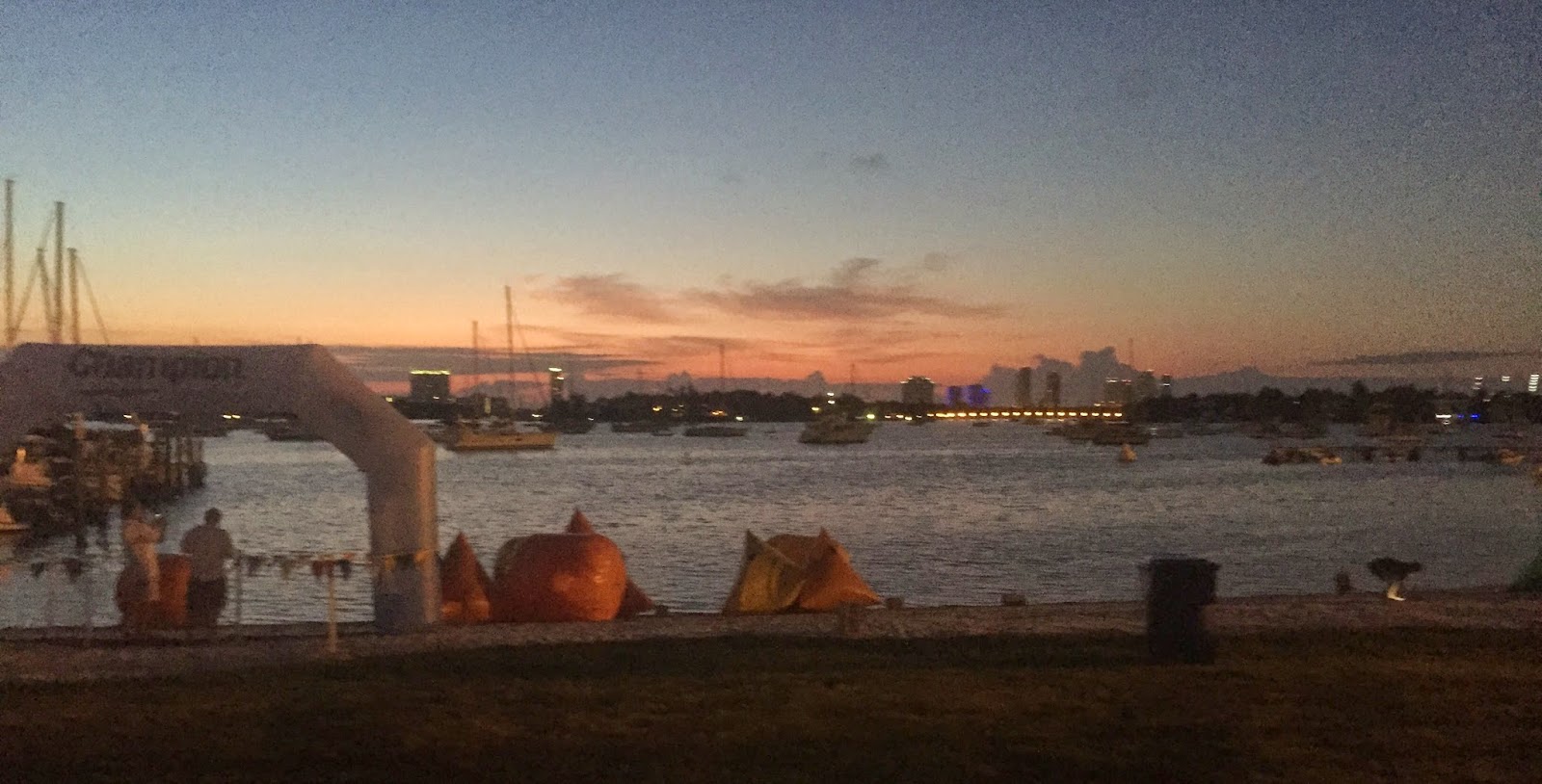 ...and then eventually more people starting arriving. There were a lot of swim clubs present so I took the opportunity to listen to the pep talks the coaches were giving to their swimmers in an attempt to soak up as much motivation as I could. I also sparked conversations with random individuals. It turns out swimmers are just as friendly as runners. This was the first open water swim for a lot of the people I spoke to, but that's probably because I sought out people that looked as confused as I was. One of the ladies I spoke with provided some very good advice, which led to my second lesson...

Lesson #2: Remove all jewelry before going in the water so that you don't become a wild life moving target. I don't wear a lot of jewelry to begin with but I was told "don't forget to take your rings off so you don't attract barracudas!". I wasn't aware (nor was I 100% convinced) that this was a valid concern for this particular event but, once again erring on the side of caution, I removed my wedding rings before the start. Why tempt fate right? Plus, I didn't want to hear her say "I told you so" if they had to pluck my mangled body parts out of the water.

I eventually went back to my car and left my rings and cell phone there. Then I did the "gear check" for my towel and change of clothes and tried to focus on the upcoming start of my event. The water was cold, but not "Antarctica cold" so it didn't take long for me to get accustomed to it. I had my feet in the water while waiting for the start of my wave (which helped) during which time I learnt my third lesson...

Lesson #3: Do not worry about the temperature of the water. It is much more practical to focus on the object you just stepped on that suddenly started moving. I don't know what it was, nor do I want to know so let's move on.

Unfortunately, the issue with my sunscreen induced burning eyes didn't resolve enough prior to the start of my event so I knew visibility was going to be a concern. However, I still hoped the burning would eventually subside and that my goggles would prevent any further problems. They didn't...

Lesson #4: Do not buy goggles from Walmart and "hope for the best" when attempting an open water swim event. The goggles did nothing for my visibility and about 100 meters into my swim they (thoroughly lubricated by sunscreen) decided to slip, resulting in the accumulation of saltwater inside the goggles. I tried to "empty" them and readjust them on my face but that proved to be a waste of time and energy, so I placed them on my head and continued swimming (which now looked like a cross between a very pathetic attempt at breaststroke and a doggy paddle).

Somewhere along the way my goggles fell off. When you are not wearing your goggles during an open water swim the life guards get worried. And when you are not doing freestyle and missing your goggles they all stop and ask you if you're OK. I was appreciative of all the inquiries because I knew that I wasn't far away from help if I got into trouble. But after a while the repeated questions started to mess with my emotions. I kept thinking "I must look like I'm dying out here if every life guard is asking me if I need help!". I admit there were a few moments when I wondered if I would be able to complete the event safely. And after the 5th or 6th time I got kicked by passing swimmers (not intentionally of course, and thankfully not in the face) I had a brief moment of panic...

Lesson #5: It's OK to cry just don't sob hysterically. I didn't get hysterical don't worry, but I did cry. Not because I wasn't sure I would finish (deep down I knew I probably would, even if it took me forever). And not because of the issue with the sunscreen or my goggles (although that certainly didn't help). But I simply felt overwhelmed. Your body may not endure a lot of impact when you swim (compared to when you run), but swimming isn't easy, neither is swimming in the open water, and neither is swimming a mile in the open water for the first time.

In addition to dealing with my burning eyes and pending dehydration from crying, I also tried to focus on not swallowing too much salt water. I was not successful in this regard...

Lesson #6: Salt water tastes horrible. Just in case you are wondering, it is equally as horrible each subsequent time you inadvertently swallow it. I'm surprised there was any water left in the bay by the time I was done swimming. I'm convinced I had enough salt water in my stomach to rival a marine biology research lab.

I must have looked so distressed because one of the swimmers stopped as she was passing me and offered to help me adjust my swim cap (which was now coming off). I told her that it probably wasn't going to make a difference so she didn't need to bother. Then she paused and asked "What distance are you doing?" When I told her I was doing the mile she said "You're almost there don't give up! I'm doing the 5K, this is my second lap and I'm tired but I'm going to finish!" And then she looked straight at me and said.. "And so are you!" She was right...

Lesson #7: Don't give up. I can't say I "finished strong" but I finished alive. I'm an endurance athlete so while I will probably never win a race or event (swimming or running alike) I know my body can handle the duration of the activity. I trained for this, maybe not as much as I should have, and being sick these past few days certainly didn't help, but I wasn't completely unprepared so at the end of the day I knew I could do it, and I did. I completed my very first open water 1 mile swim! 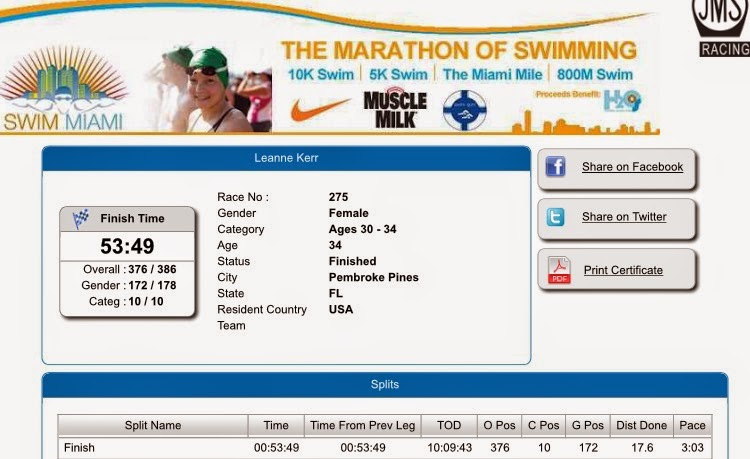 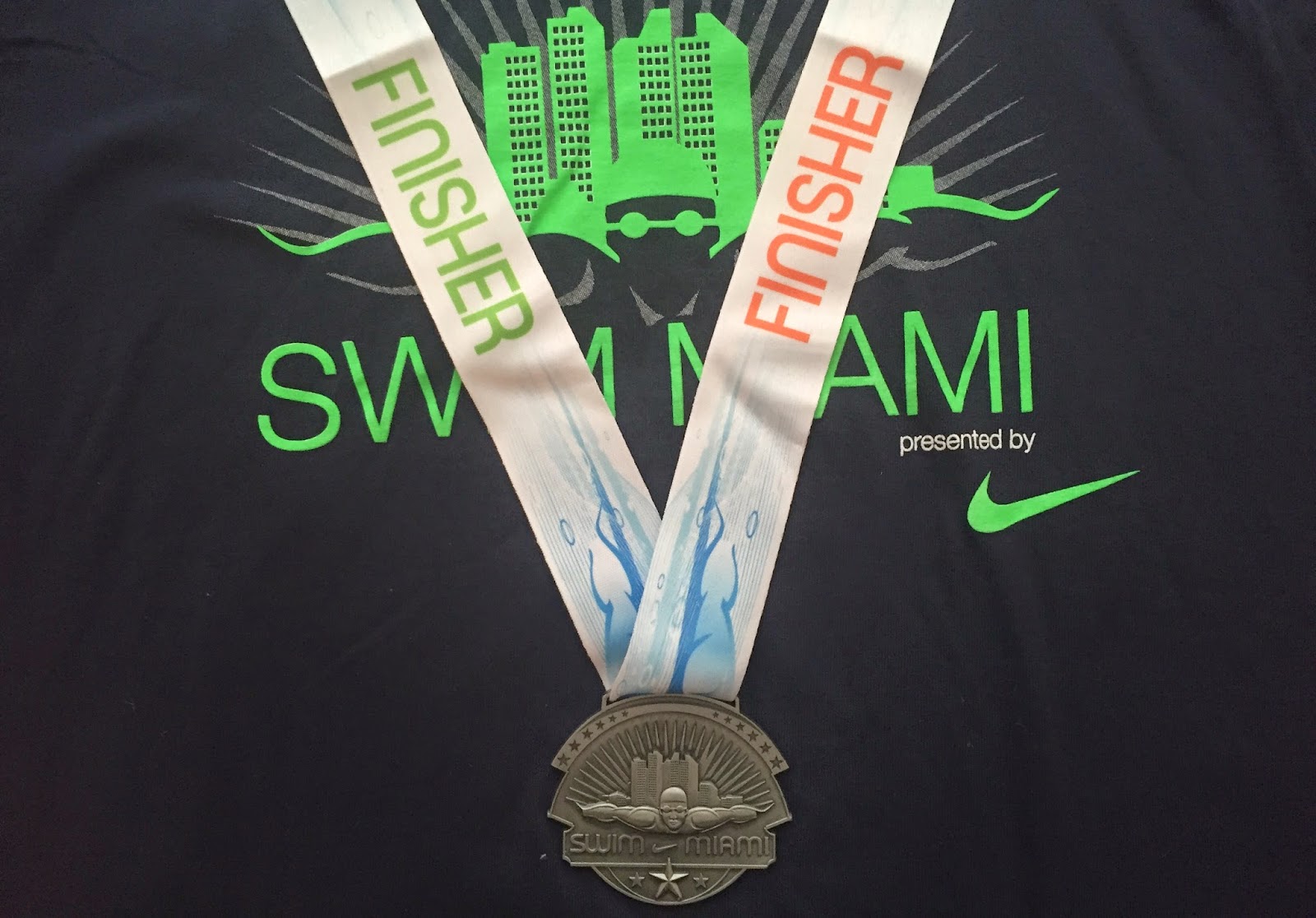 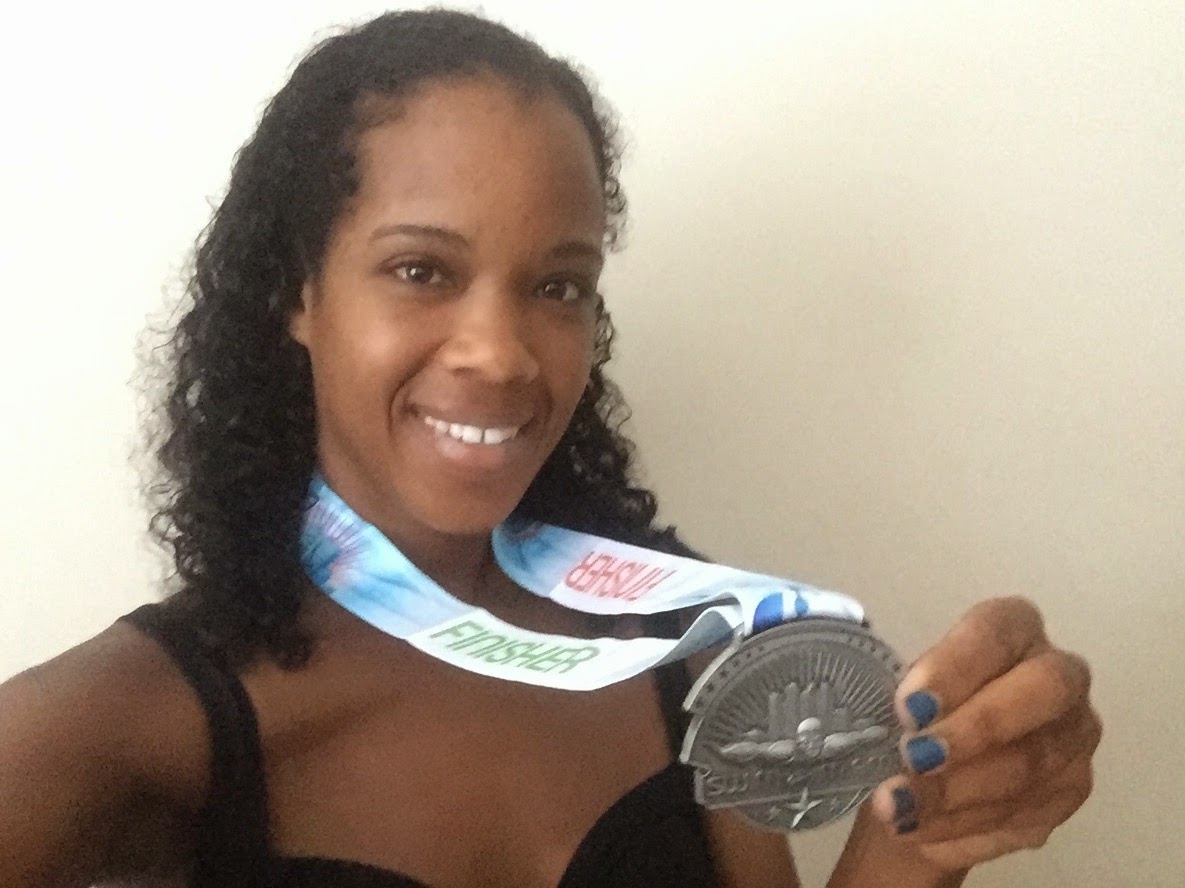 So, would I do this again? Yes! I am totally exhausted, suffering from a post-swim "can't keep any food down" syndrome (probably thanks to all the salt water I ingested), and my eyes are still burning, but I plan to do this event again next year (and I already made my brother promise he would do it with me!).

Would you do an open water swim race?

How was your training/racing this weekend?
Posted by This is my faster! at 4:30 PM