When I woke up on race morning I envisioned my friends silently cursing me for reassuring them that the "weather is going to be great!" It actually was great running weather (I'll take cold and windy over hot and humid any day) but when I stepped outside and the wind cut through my bones like a serrated kitchen knife I wasn't very happy.

I was up by 2:30am and out the door by 3:45am because my Type A personality, combined with my inherent lack of patience, doesn't do well with life's greatest challenges... like trying to find parking in Miami on race day. I got to the American Airlines Arena parking garage with over an hour to spare so I hung out with Diane and Johnny until it was time to start the journey to the corrals. On the way to Corral I (my placement this year) I noticed there wasn't a crowd by the porta potties and took advantage of another benefit of arriving early. It wasn't until after (once I'd resumed my journey) that I saw the mile long line on the other side of the designated portable bathroom area. I felt really bad about skipping so many people cause I personally get annoyed when others do it to me (so if you were in that line please accept this blog confession/deeply sincere apology).

We eventually made it to Corral I... 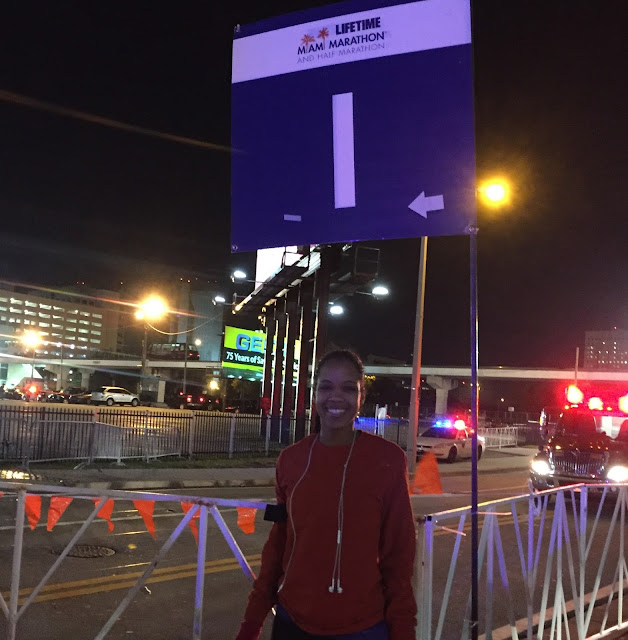 Diane and Johnny waited with me until the corrals opened up... 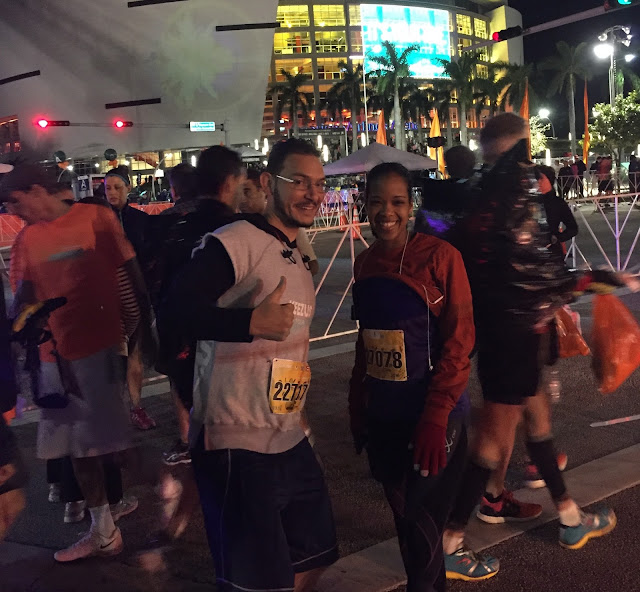 And then they went off to find his corral while I waited for Niqui to arrive... 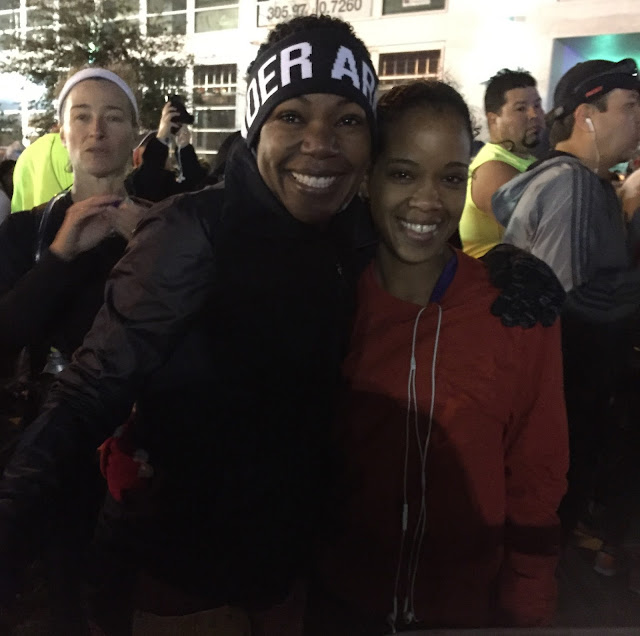 (It was also Niqui's birthday!)

This year it seemed like there was a long delay between starting the corrals. The time between each corral got longer and longer. Which might have been for crowd control purposes but when you're standing outside in 40+ degree weather you eventually start loosing sensation in your fingers and toes (despite gloves and two pairs of socks)... 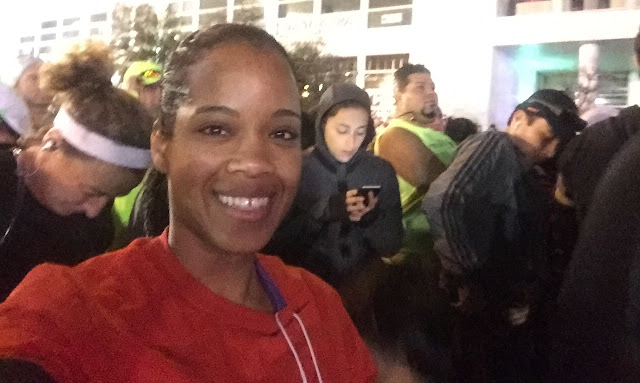 Finally they called Corral I and we inched forward like slow moving cattle towards the start line...

My watch was set to 1min:30s intervals but I ignored that so I could run with Niqui as much as possible. But by the 3rd or 4th time of her looking back to make sure I hadn't died already I told her to run ahead (she's much faster than I am).

Once Niqui warmed up she took off and I turned on my Soca Song Crush playlist for some on-course musical entertainment... 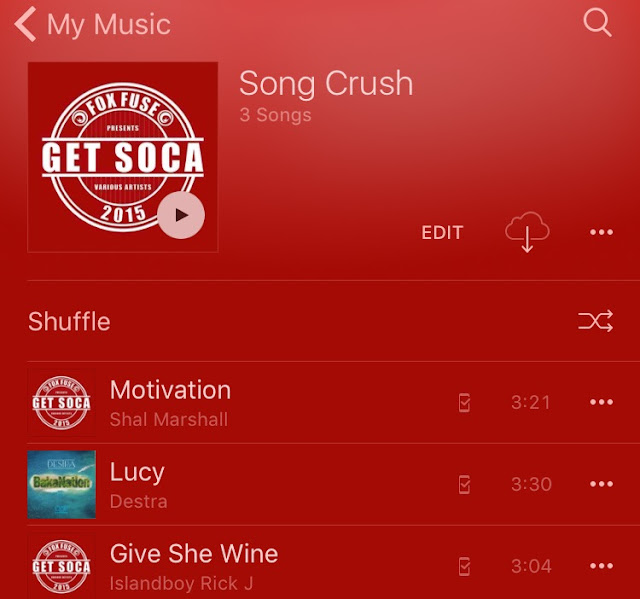 I had these three songs on repeat for the entire race :)

I only took one picture along the course... 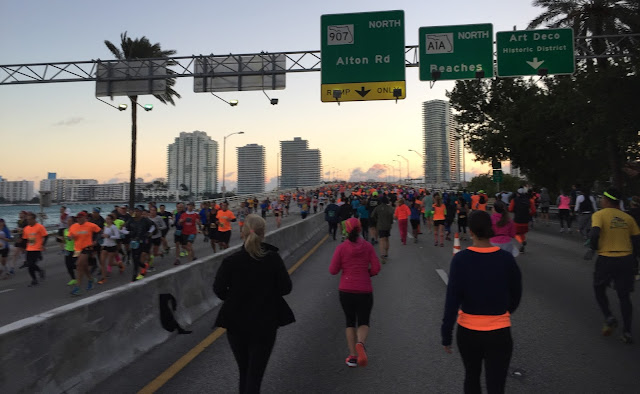 I saw a couple of my JA and SoFL running peeps along the course but apart from that it kinda felt like a solo run. Don't get me wrong, I always enjoy the energy of the crowd on the race course so I don't necessarily need a conversational running buddy. But there are times when I kind of want the verbal distraction and Sunday just happened to be one of those times.

I continued to ignore the pre-set run:walk interval alerts chirping and vibrating from my Garmin watch, even after Niqui ran ahead, and pretty much ran as much as I could before taking a walk break. The shortest running duration was probably 1 mile and the longest was about 3.5 miles. I really tried to keep the walk breaks to 30 seconds. The only real exceptions to that were the moments when I walked the bridges; when I had to remove some of the clothing layers; and when I had to fix my pony tail holder because it was doing this ridiculous "too tight" or "too loose" thing which was completely throwing off my coordination.

There's something about the Miami Half Marathon that motivates me to test my running limits. Last year I tried to run for 1 mile & walk for 1 minute and I was able to do that without a problem (even though I hadn't trained beyond 5:1 intervals). For this year's event training has been a struggle. Coming off my fall and subsequent hip injury (last August) I've felt like everything has been off. I was able to do Chicago in October but that wasn't without pain. And then I rested and was starting to feel confident in my running again until I messed up my knee during my 18 mile training run in December. So the ability to run as much as I did was more likely attributable to the energy of the event and less likely related to my training. Regardless I did it and ended up with a finish time of 2:39:22... 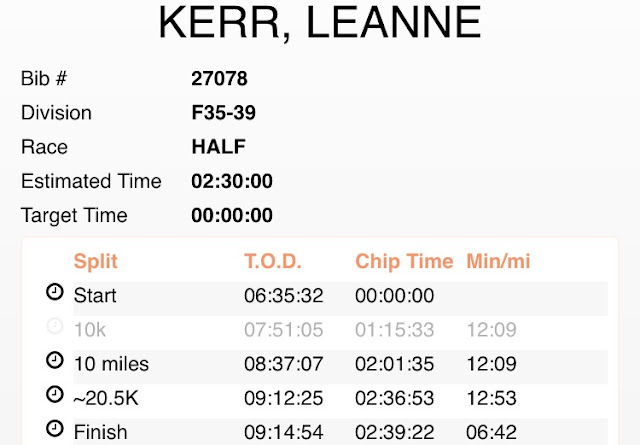 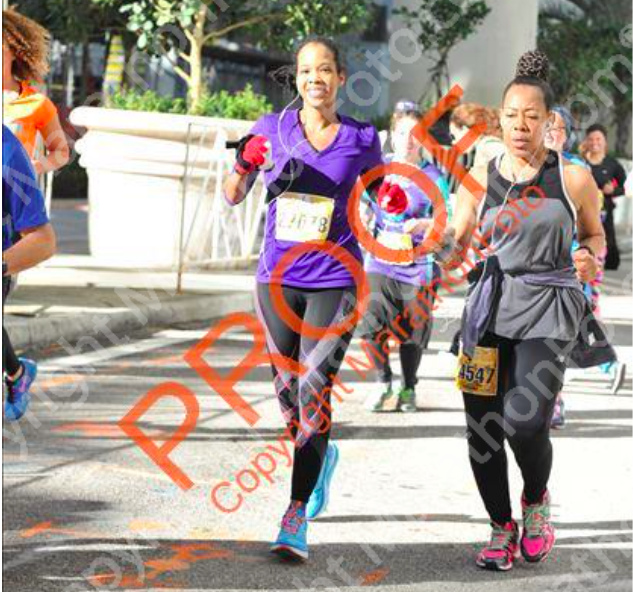 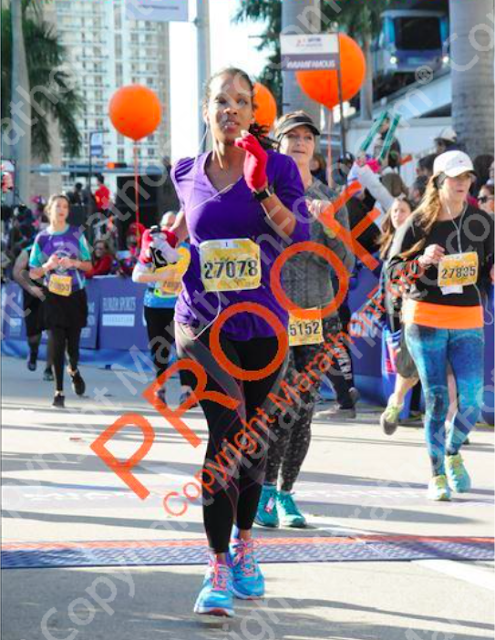 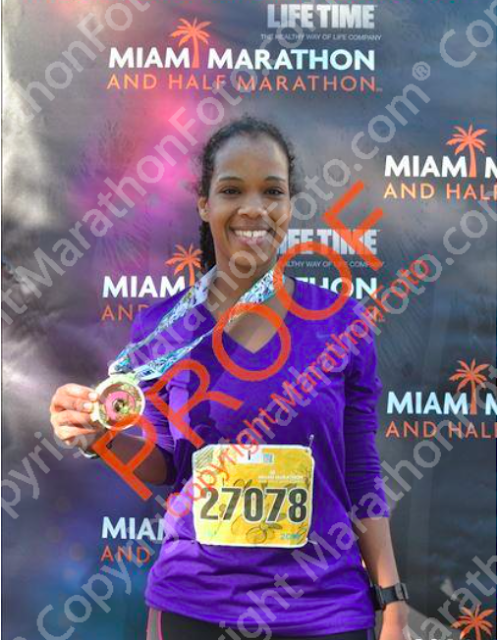 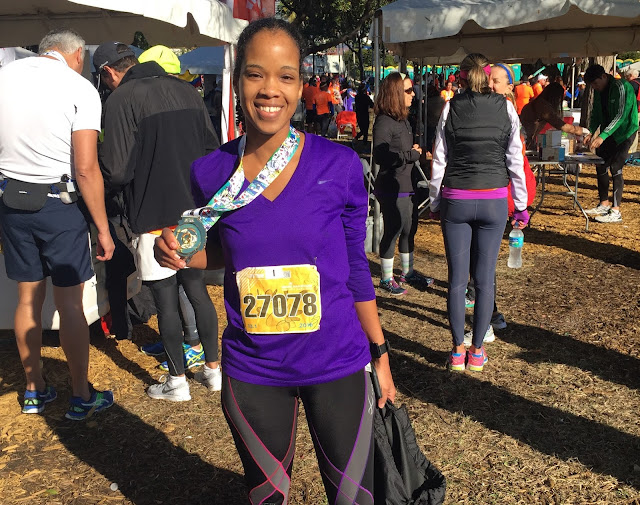 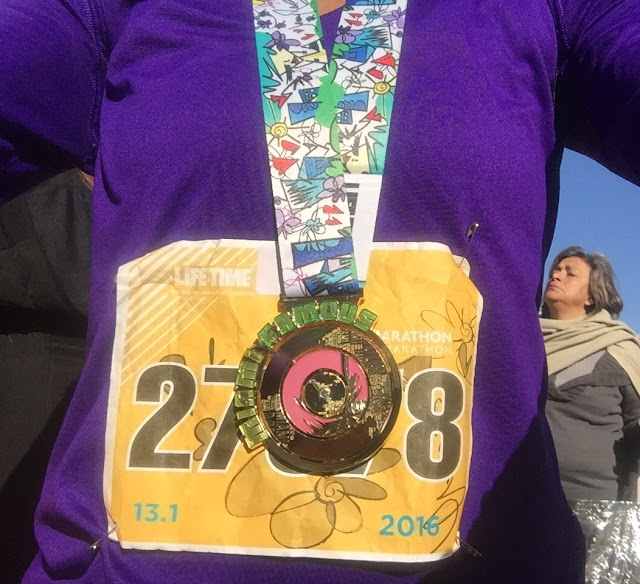 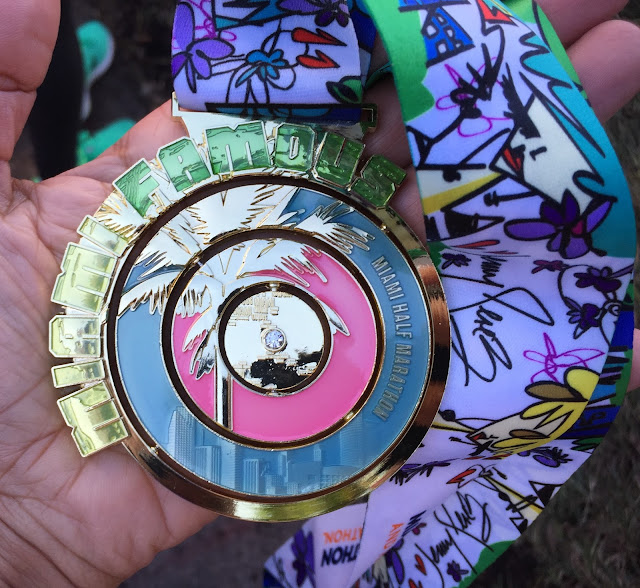 Once my race was done I switched from "runner" mode to "cheering squad" mode and spent the rest of the time tracking and cheering for all my friends doing the full and those still running the half.

I really enjoyed the race this year. There is something about this event that always makes it memorable and amazing. I was still caught up in that feeling of post-race euphoria when I signed up for the 2017 Miami Marathon during the race blitz.

Training for Miami 2017 will "technically" start around September but my race calendar gets planned 12-14 months in advance (a pro & con of my type A personality) so I've already made the necessary adjustments to account for base mileage maintenance and Fall mileage increases.

During a post-race period I often get asked "Would you do it again?" That was a popular question after Chicago and it was a popular question after Miami this year. Based on my quick 2017 registration how I feel about repeating Miami is pretty obvious, but my primary goal is to have a safe training year. Hopefully that will translate to a successful Miami Marathon in 2017 :)

After that I will probably just do the half marathon distance at this event. Not because there's anything wrong with the full, but my Bucket List allows for 13 (unique) full marathons, so once I check Miami off that list it will be time to focus on someplace else... Like Athens... or China... or (if the race lotto gods finally get their act together) the Big Sur Marathon in 2018 :)

Congrats to all the Miami Finishers!!!! I hope the event was everything you wanted it to be. And if not... the blitz is still open ;)
Posted by This is my faster! at 7:22 AM