Just in case there were any doubts... {Sarasota Half Marathon Race Recap}

The night before a race I'm always a bit nervous and Saturday night was no exception. I've come to accept it as part of the routine now (along with lack of sleep). But despite the nervousness and restlessness I woke up on Sunday morning (at 3am) feeling ok about the Sarasota Half Marathon. I'm sure a lot of my "feeling ok" had to do with the encouragement and "pep talks" I got from family and friends the night before and morning of the race...
"Have a good run"

"I'm proud of you already"
"Happy Running!!!!"
"Good luck & have fun"
"This is your race, keep focused"
"Don't judge the race too early"
.
Part of my pre-race pep talks also included a discussion about racing strategy. Normally I have an idea how a half marathon will shape up by mile 3. But I was encouraged not to judge the race too early; to make an assessment at mile 5 and then "go from there". That single piece of advice led to a significant change in my running strategy. And it worked.
.

Debi (a friend of mine from my running group the Memorial Milers) stayed at the hotel with me and we carpooled to the race with Will (another running group friend of ours) so that we could get to the race venue really early (almost 2 hours early). Then we waited around for the official start and took "pre-race" pics with other friends at the event... 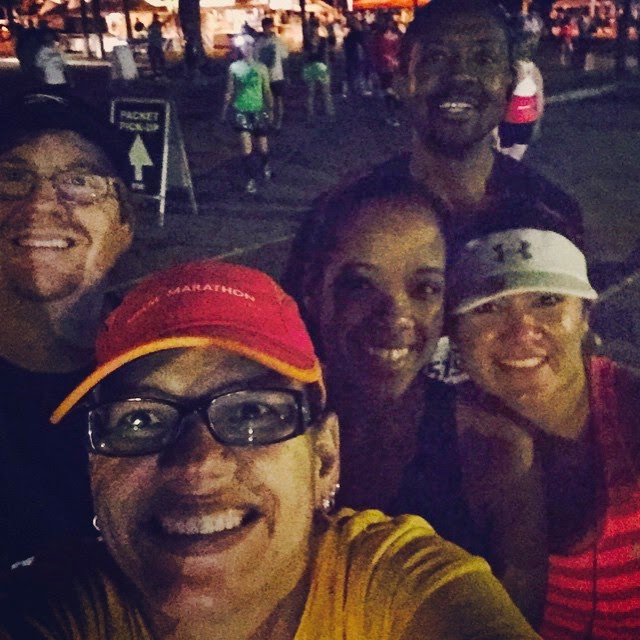 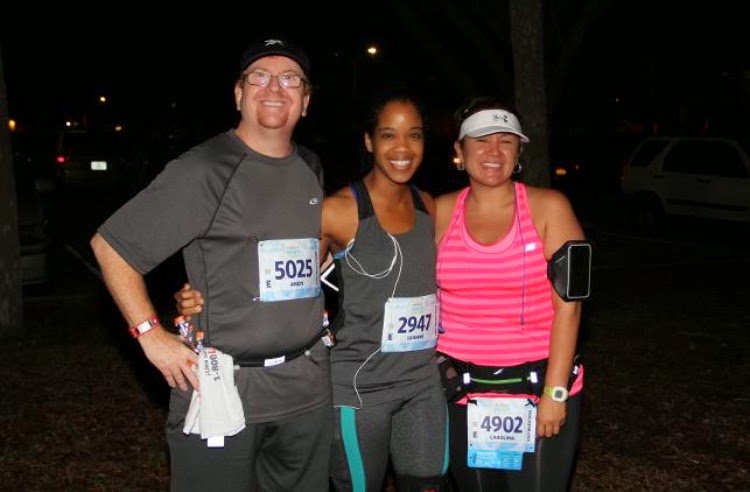 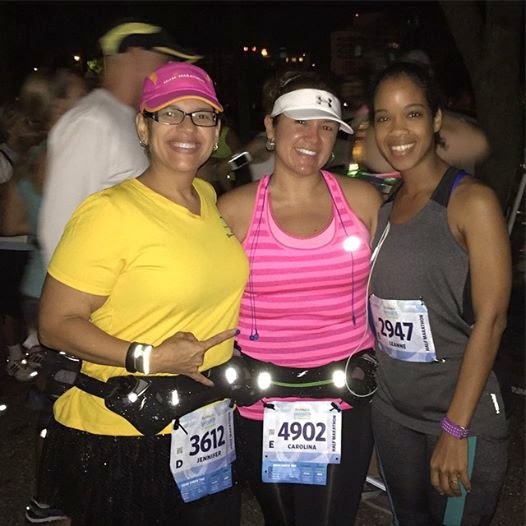 photo credit: Andy
I was in corral E... 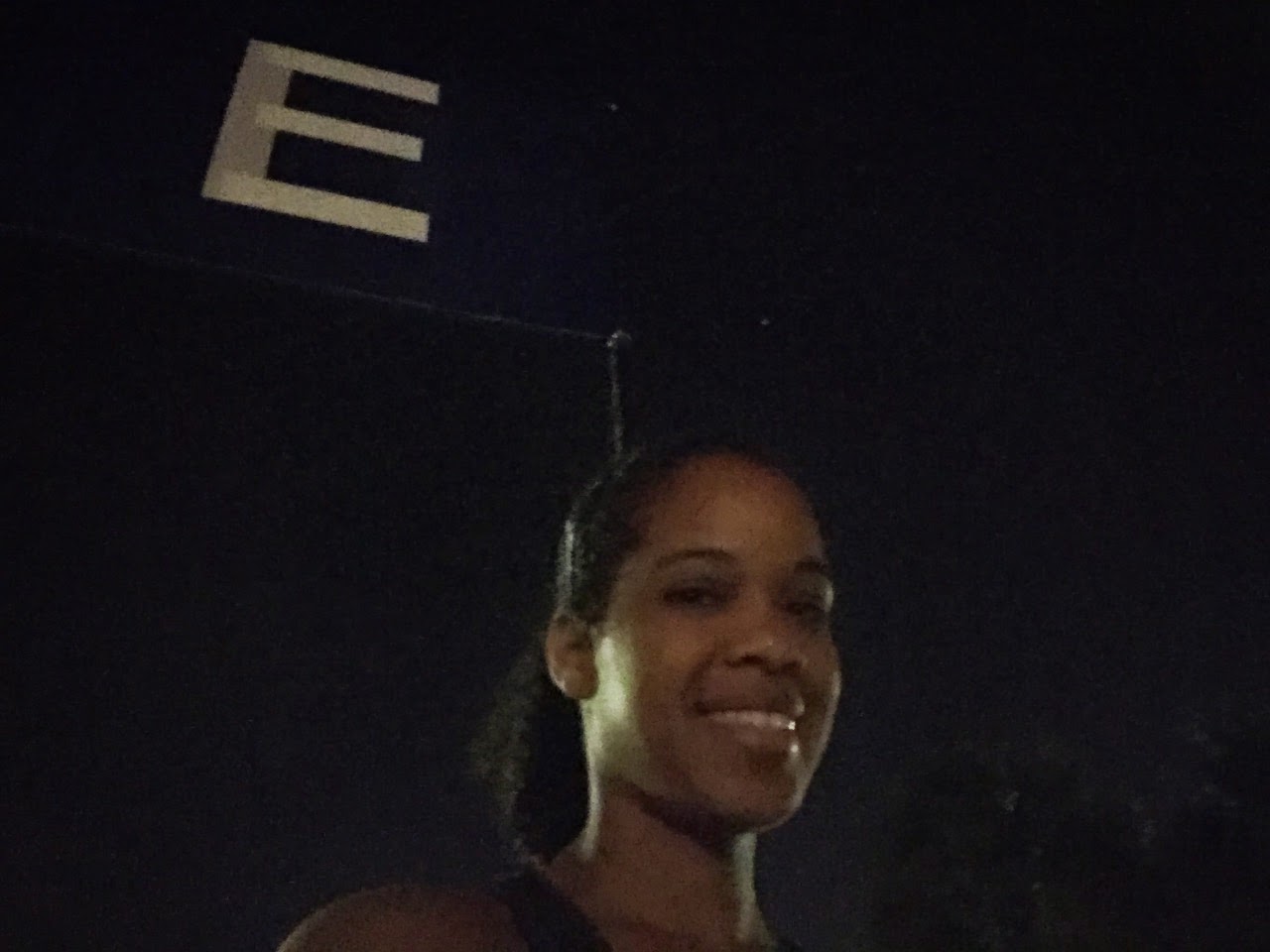 I was told there were approximately 5000 people at the 10th Anniversary race this year... 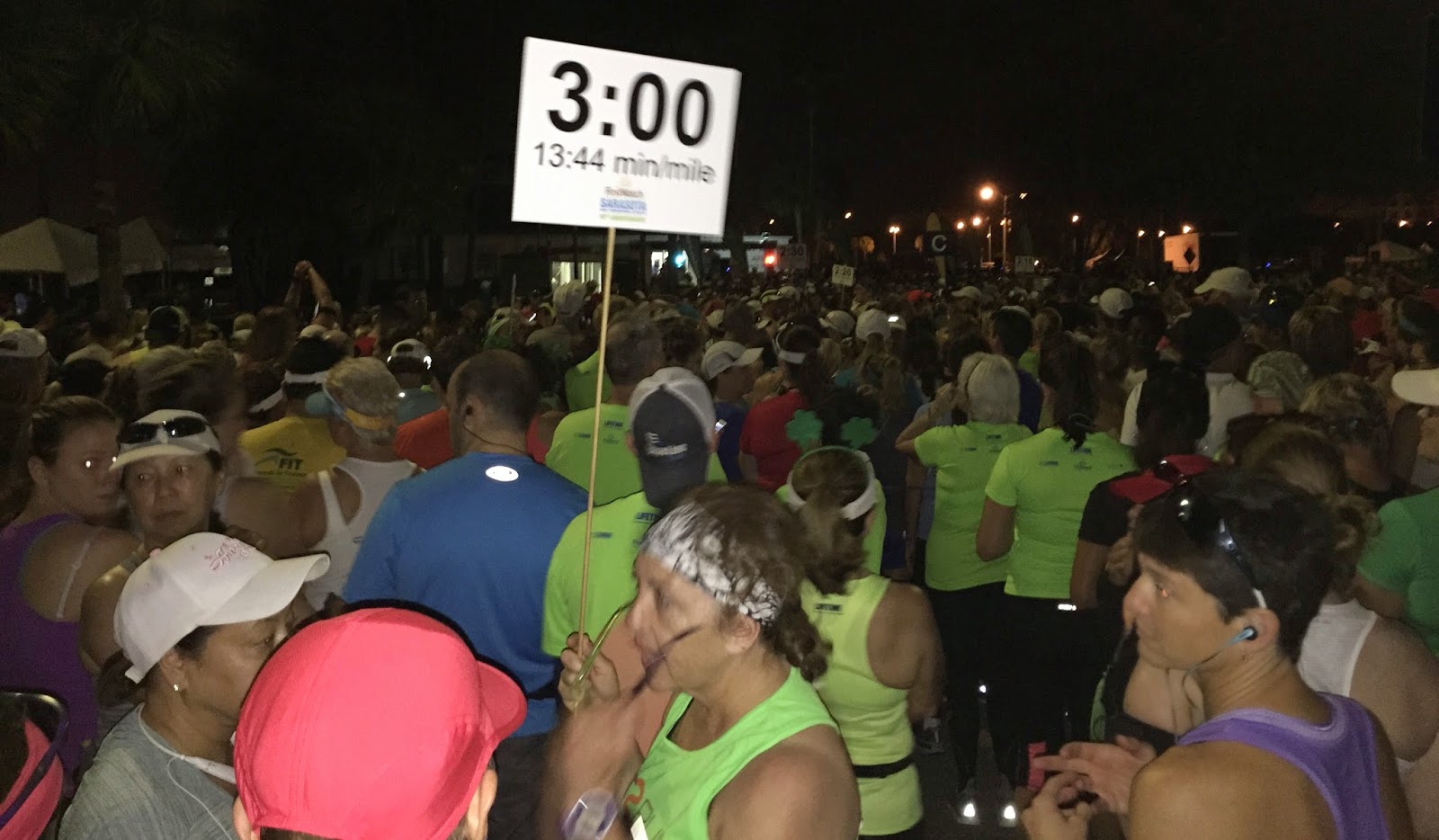 And the weather was almost perfect at the race start time (which ended up being a little delayed)... 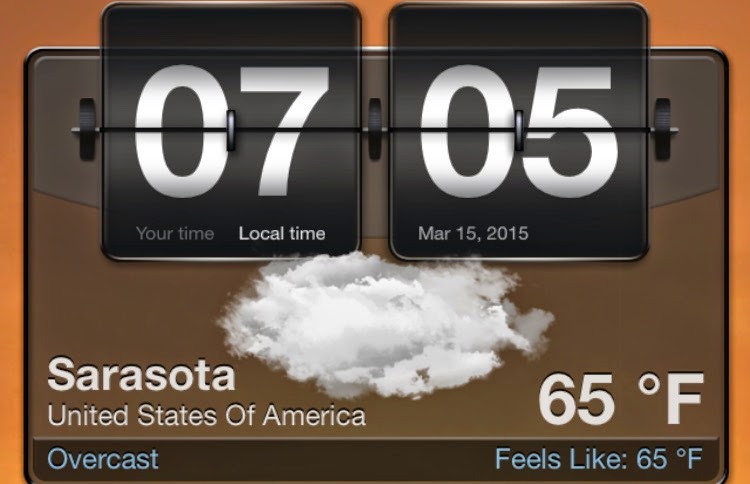 Once the race got started I was off to tackle the primary bridge on the course.. 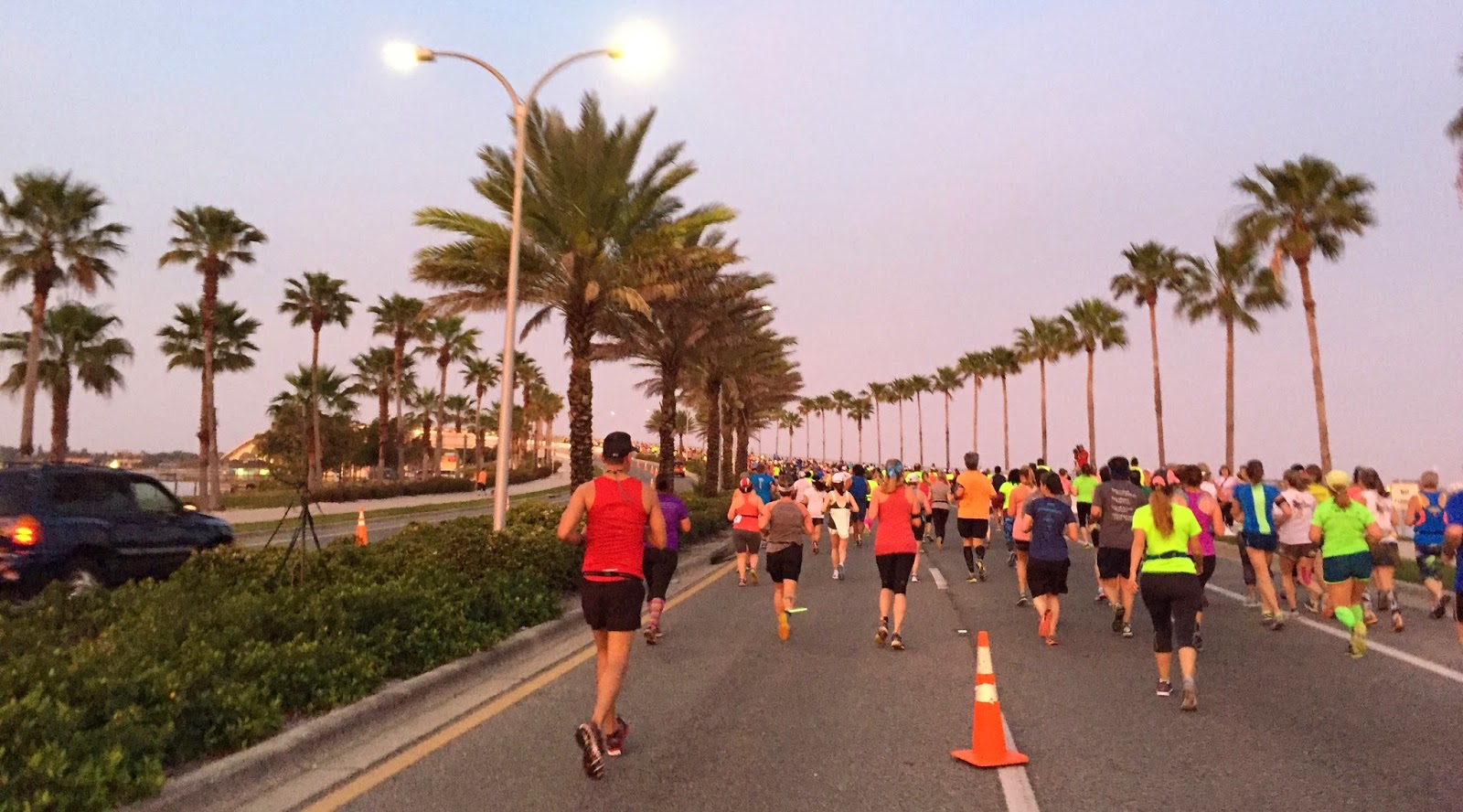 (this is the only "on the course" picture that I took)

This was the first time running Sarasota for many of us but Will (who has run the race before) reassured us that the bridge wasn't going to be too bad because it had a "gradual incline". As I headed over the bridge I discovered that Will and I have a very different definition of "not too bad" and "gradual incline". My legs were on fire!

In keeping with all the advice I received, I tried to take in the scenery. Unfortunately, I can't say I had a true appreciation for the beauty that was evident throughout the route because as the shin splints faded and my average pace got better and better, I realized that I just might be able to have a good finish time (so I focused on that instead).

I didn't really see a lot of photographers along the route, but there were a few towards the finish, and Sarasota organizers provided free race photos!!! 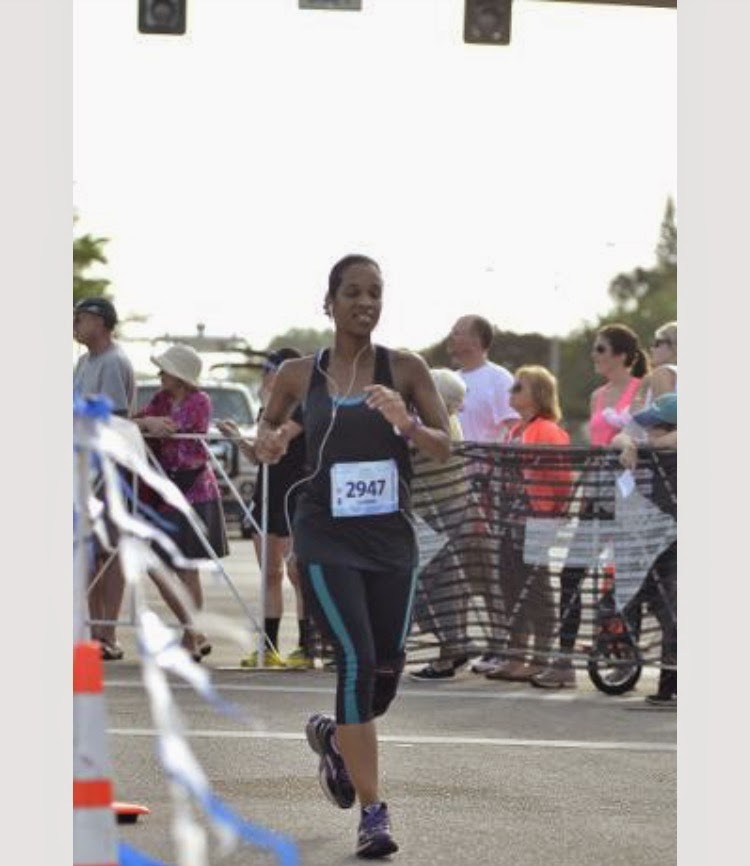 (why do they always snap pictures when my eyes are closed? I look like I'm "sleep running") 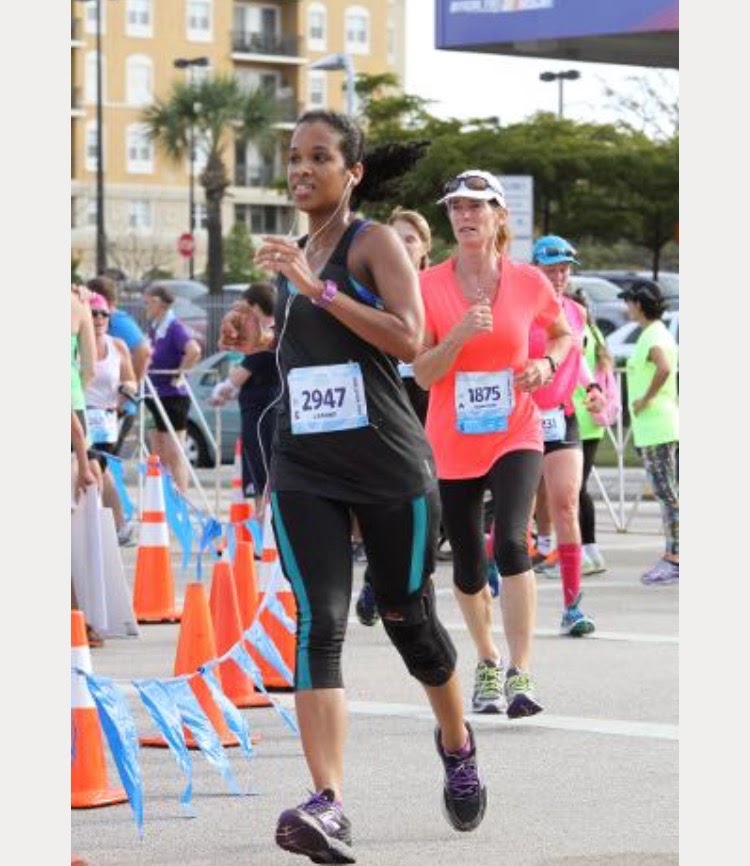 (heading towards the finish)

The look of "semi-excitement" in that last picture is a direct result of knowing that I was going to get a PR. I focused on finishing strong at this point (with only 0.1 miles left to go on the course) and ended up with a new half marathon time of 2:26:41!!! 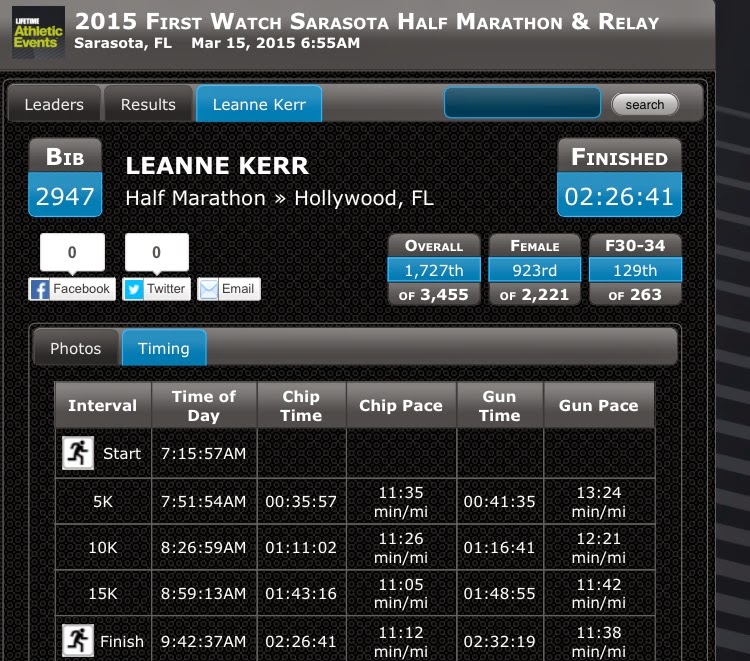 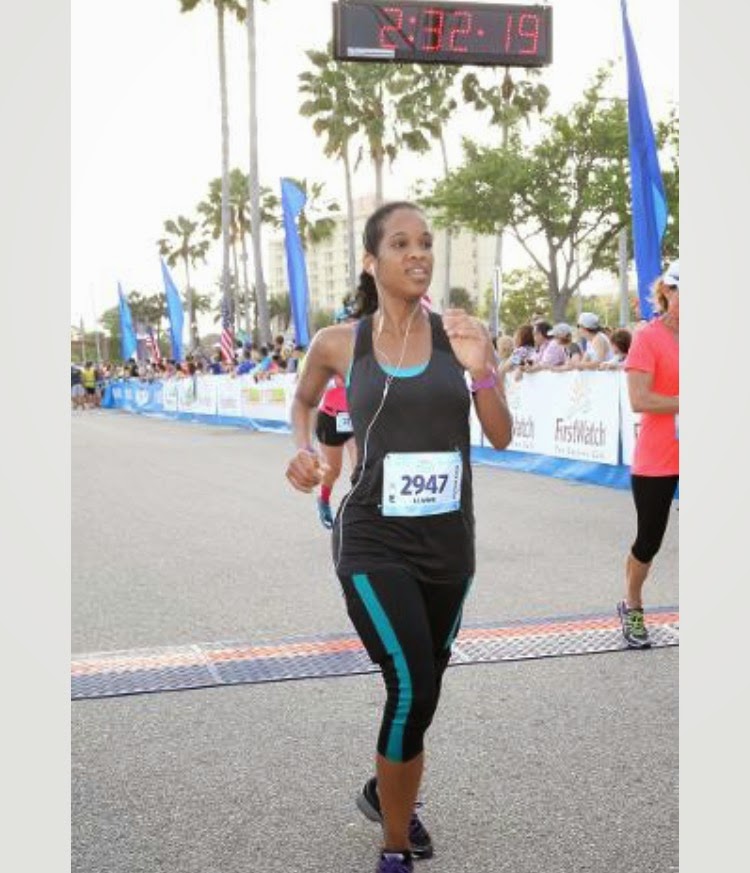 This was the fifth and final race in the Florida Storm Series for this season so I collected my Category 5 medal and took another finisher photo with both medals... 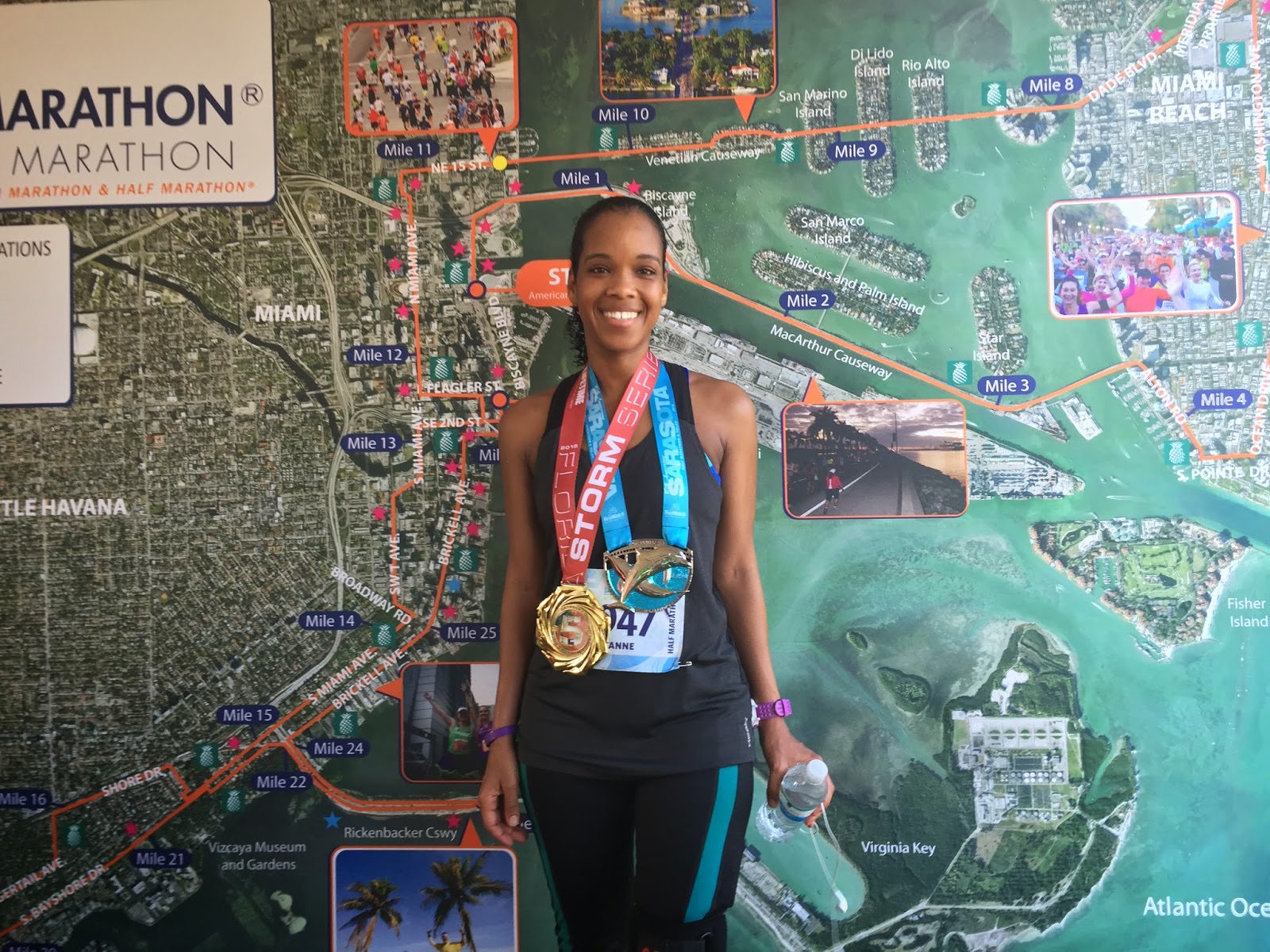 (that map in the background is of the Miami marathon route... I'm not sure why they didn't have one with the Sarasota route)

And then I took some pics with my "favorite" bridge in the background... 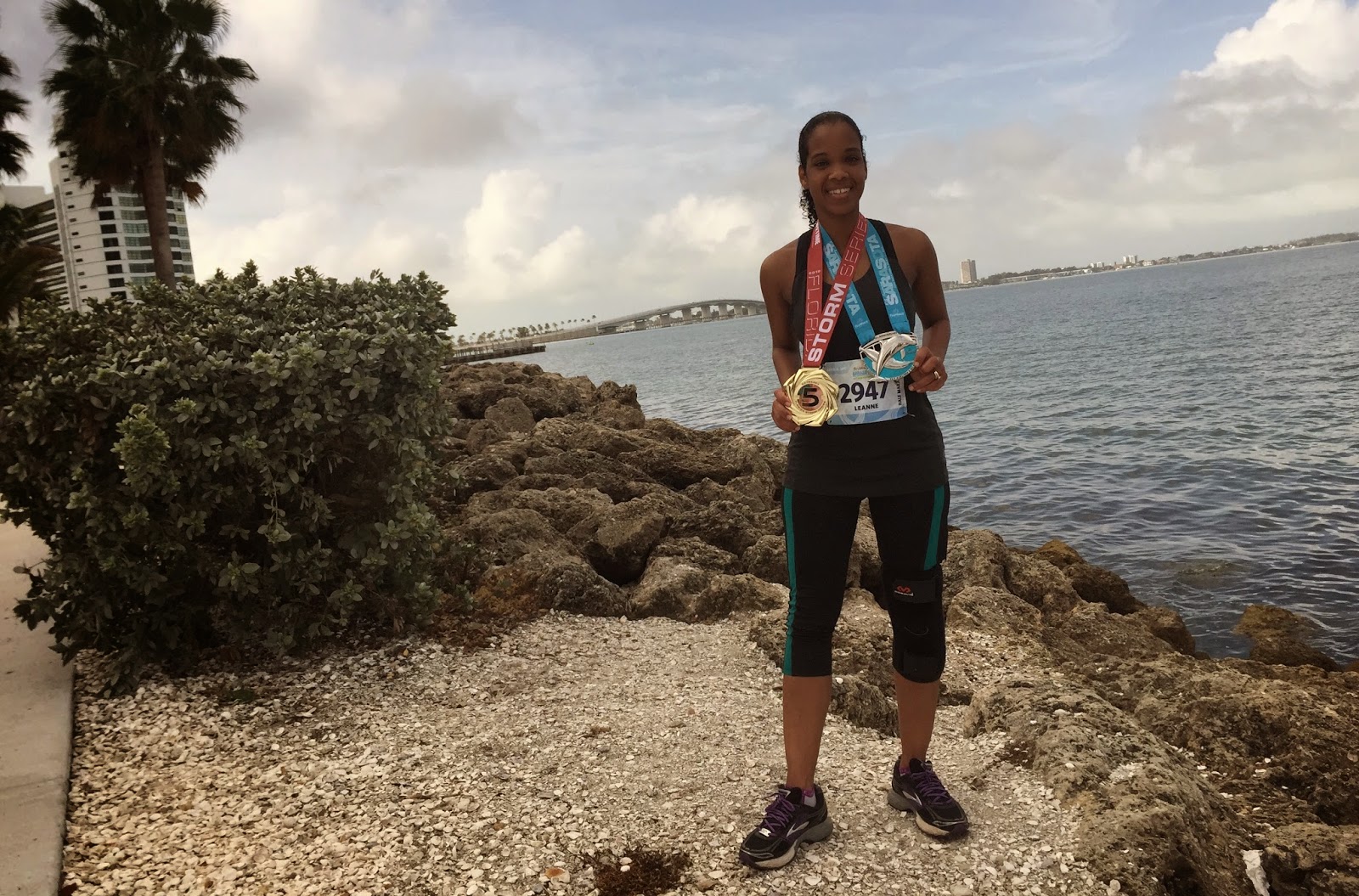 A close-up of the medals... 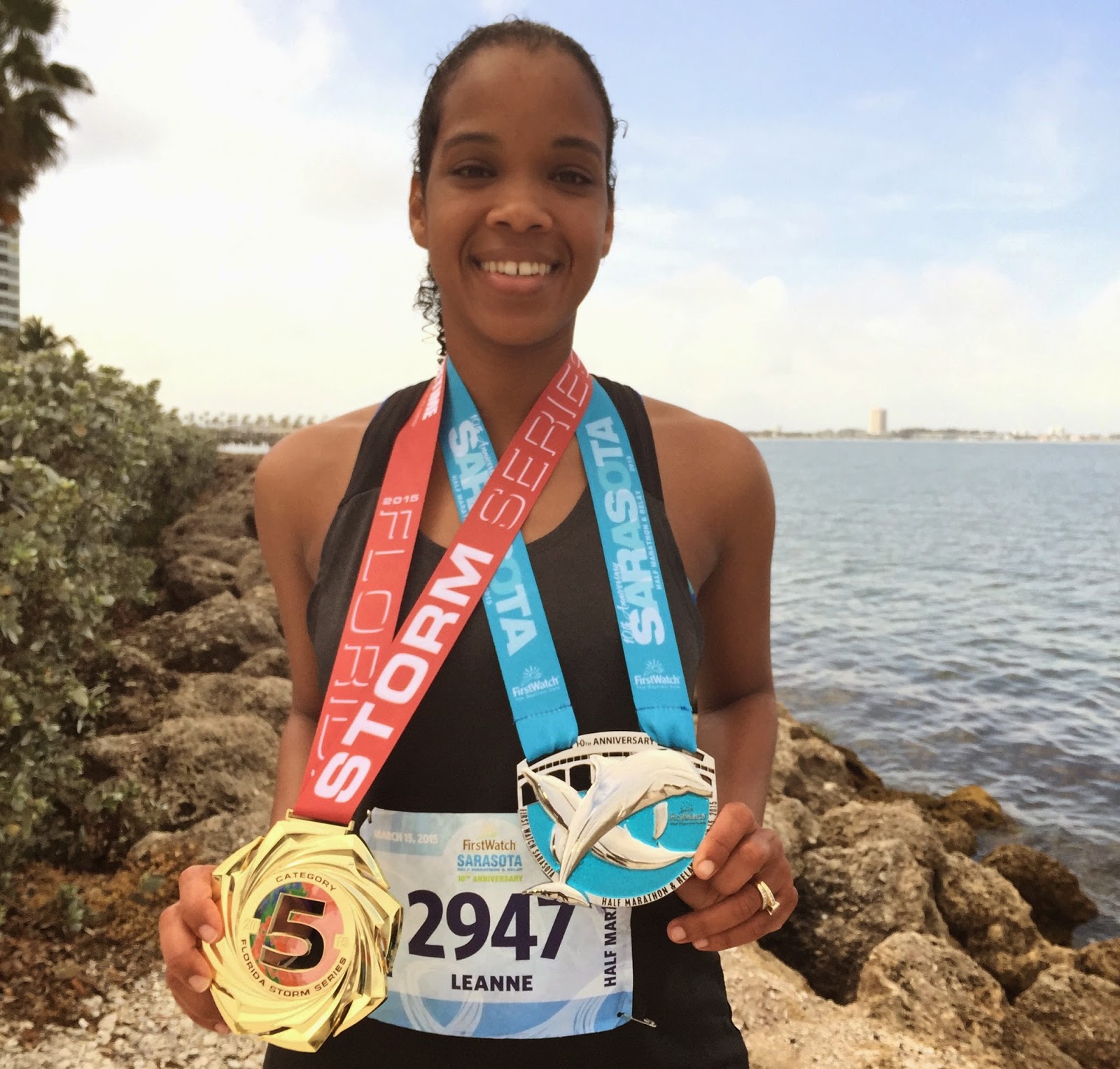 My failed attempt at a panoramic pic...

I couldn't be more excited about my finish time at Sarasota, especially because two weeks ago I had another great finish time at Miami Beach! So what changed? So many people have asked me that but the truth is I'm not 100% sure. Only two things have remained the same in all 3 of my marathons this year:
#1. I've been focusing on things that are encouraging and motivating throughout the races. I try and stay away from negative thoughts as much as I can, and focus on things that make me happy. At times I pretend I'm running in a different world, free from shin splints and knee pain secondary to hamstring tendonitis. A world where the weather is perfect for running; my average pace is sub 10 minutes per mile; there is plenty of water for hydration; and you don't need a bathroom break during the middle of your run. Clearly that world doesn't actually exist for runners (it only exists in my head and my heart). 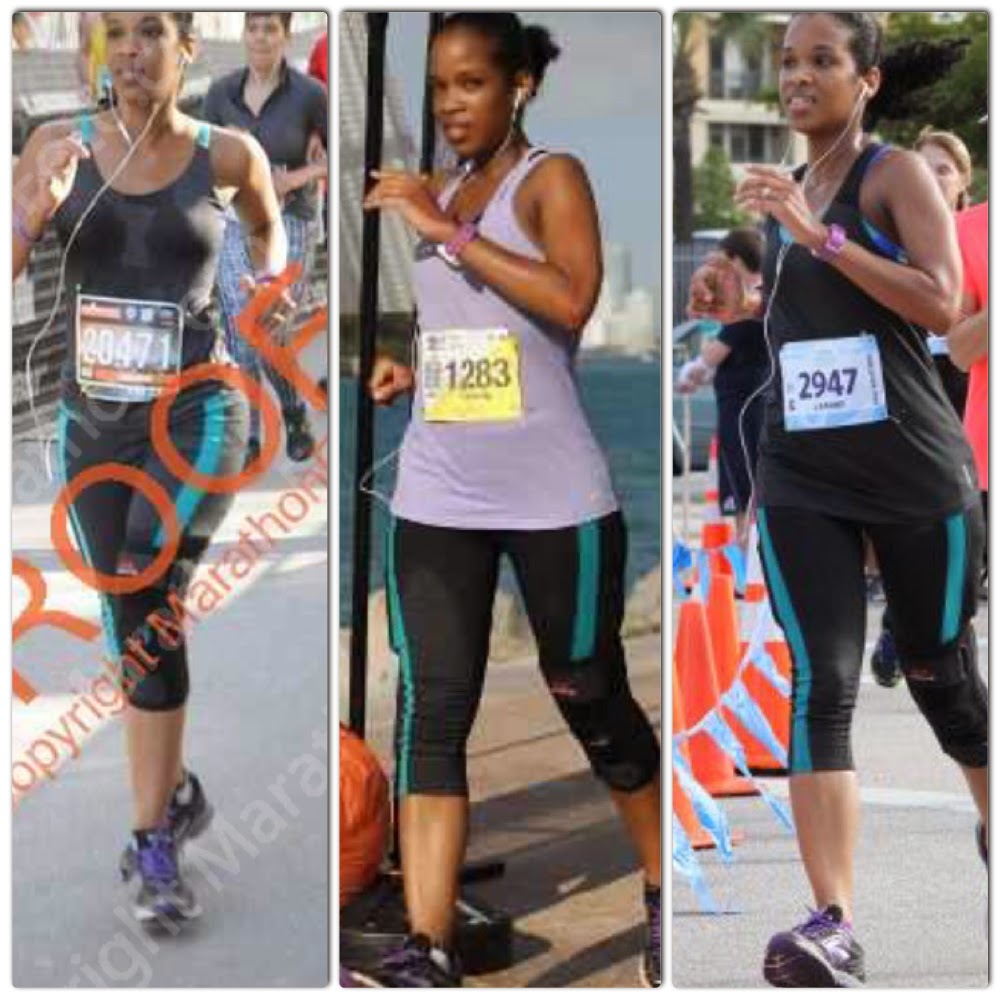 I'm not superstitious but I think a trip to Forever 21 to get more pants is in order... unless the luck is only ingrained in this specific pair, in which case you'll be seeing ALOT MORE of them in future race day pics ;)

Just in case there were any doubts about my PR at Miami Beach, or any concerns that it was a "fluke", the half at Sarasota dispelled them. I may not be able to see the progress every day, but I am getting stronger and faster. Maybe it's because of the positive thoughts on race day, or my pre-race pep talks. Maybe it's my training or the fact that my body is getting more conditioned after running so many races in such a short period of time. Maybe it really is my lucky pants. Or maybe it's a combination of a multitude of factors that have led me to the point of back-to-back PRs in the span of 2 weeks. Whatever the reason (or reasons) I'm grateful and excited, and even more motivated and determined to stay focused in my training.

The 2014-2015 Florida Storm Series has come to a close and I successfully completed all 5 half marathons... 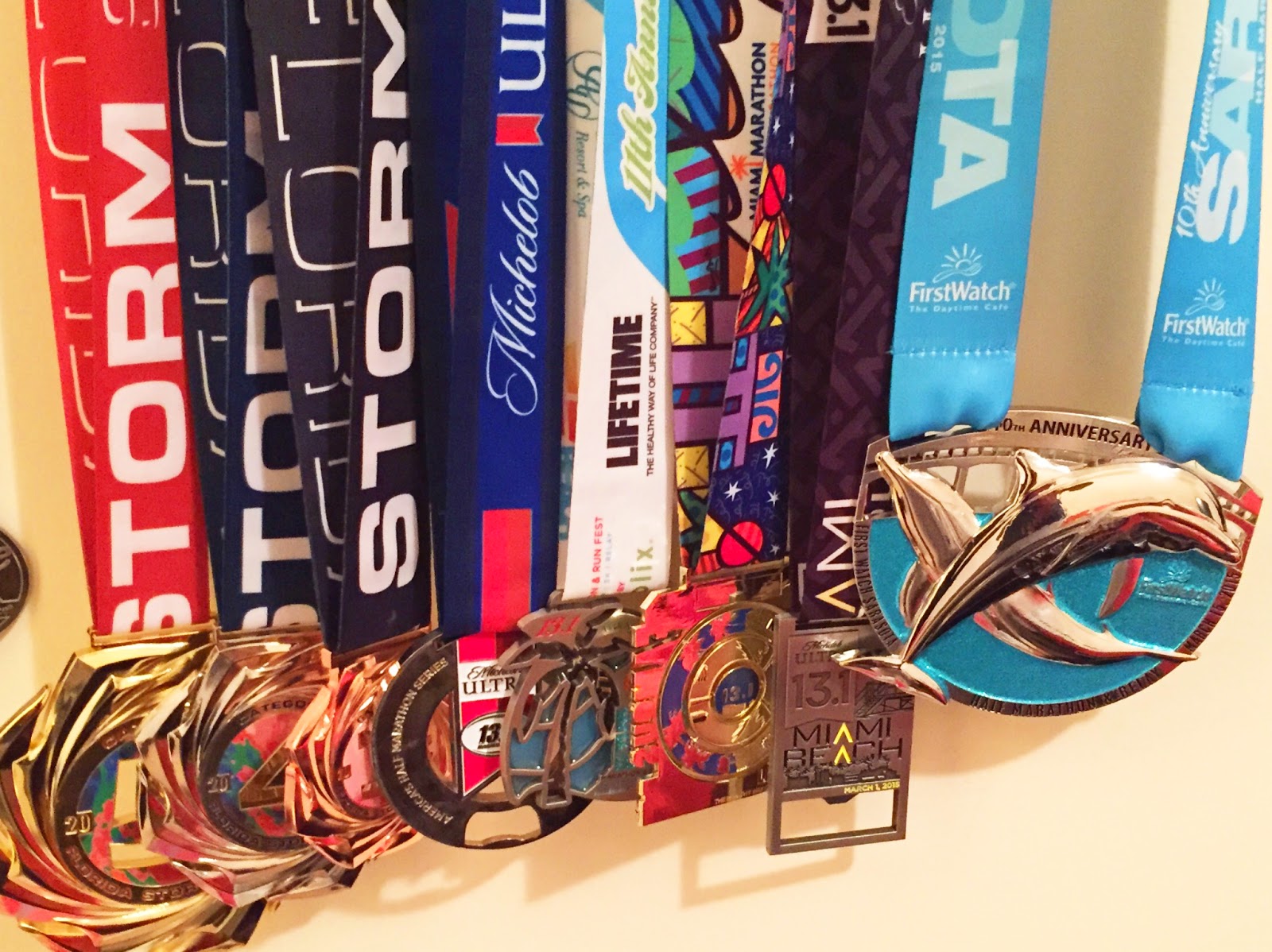 photo credit: Damian
That's only the beginning of this year's journey, but what an amazing way to finish the Storm Series Season!!!

Congratulations to all the First Watch 2015 Sarasota Half Marathon finishers!!!!!

How was your Sarasota experience?

Do you look for races that are part of a series just to get the extra race bling? {I do}
Posted by This is my faster! at 10:06 PM