I'm typing this race recap of the Miami Half Marathon while I wait for my bone marrow to defrost. It was that cold this morning. Usually, I love running in the cold, but this morning it was also raining and overcast so the combination of cold and wet made my insides freeze. Apart from that the race was incredible! 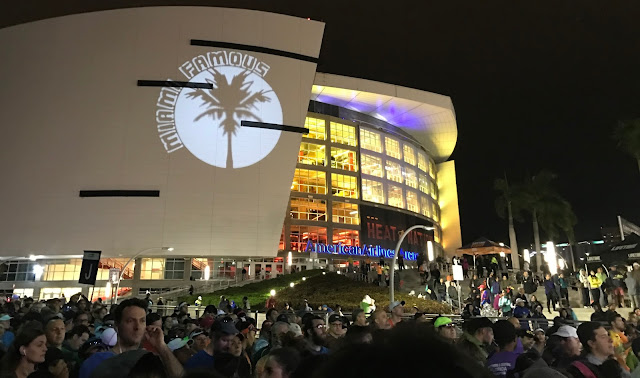 Jani and I got to the parking garage around 4:20am and stayed in the car (with the heat on) and took a nap. We both got less than ideal sleep last night so we were very tired. But eventually we had to pry ourselves from the warmth and safety of the car and make our way to the corrals. We were in Corral J... 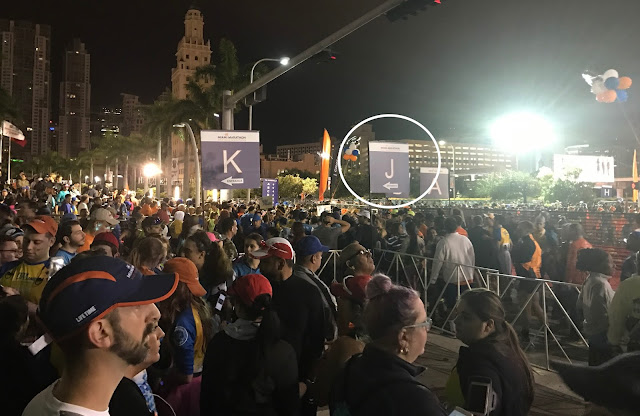 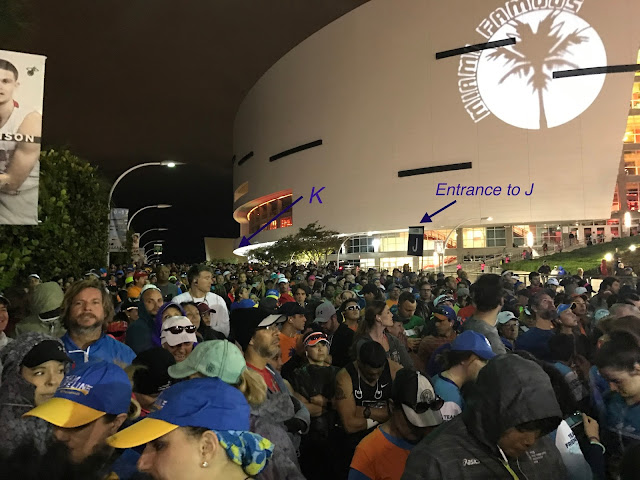 (Corral K was behind us) 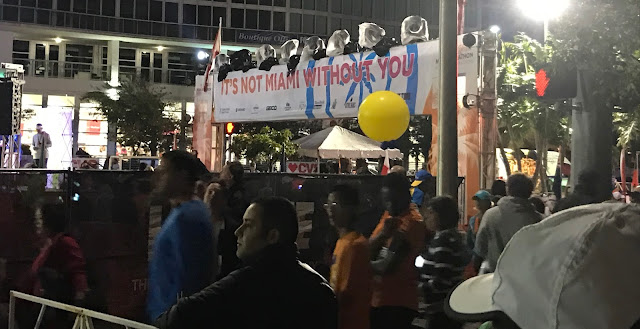 While waiting in our corral, the rain started, turning a cold very cold morning into a very cold and very wet morning. Jani and I had ponchos and thermal blankets (and long sleeved tops) but we were still bone chilling cold. Now I know that probably sounds ridiculous to anyone reading this who lives in a cold state. It's even more ridiculous coming from me since I really want to live in Chicago. But waiting in the cold and rain just made me wish I was on a beach tanning somewhere (which, knowing South Florida's weather, I'm probably going to be able to do tomorrow 😉).

Anyway we finally started and our race strategy was pretty straight forward: I was going to do my run 1 mile: walk 1 min intervals and Jani (who tried that interval for the first time during the Tropical 5K yesterday) was going to do it for as long as she could and then cut back her intervals as needed. We both ended up maintaining the 1 mile:1 min intervals (despite the cold & wet conditions) for the entire race 😊. The course was a little different this year, but the spots that were the same felt familiar, and it was nice having a sense of familiarity with the route.


There were sufficient water/aid stations along the course, and even though it was cold I made sure we stopped at every station for hydration (even though the water tasted weird at some of the stations). There was also enough on course entertainment. Not as much as I've experienced in the past, but enough (the weather may have inhibited some of the typical entertainers from performing along the route). There were several big cheering sections and several smaller ones. But, there were also some really quiet spots along the route. Normally I would run with music if I was anticipating a quiet route (or sections along the route) but since I was running with Jani I'd put my earbuds away,

I took zero pictures along the course. Usually I try and snap a picture or two during a walk break, but my fingers were frozen and numb. It was hard enough trying to take out my electrolyte capsules, there was no way I was going to try and maneuver getting my phone and taking a few pics. Additionally, I had on a long sleeve top (covering my bib) for most of the race so I don't have any official race photos from the course (yet). As a result, the next set of pictures are from the end of the race... 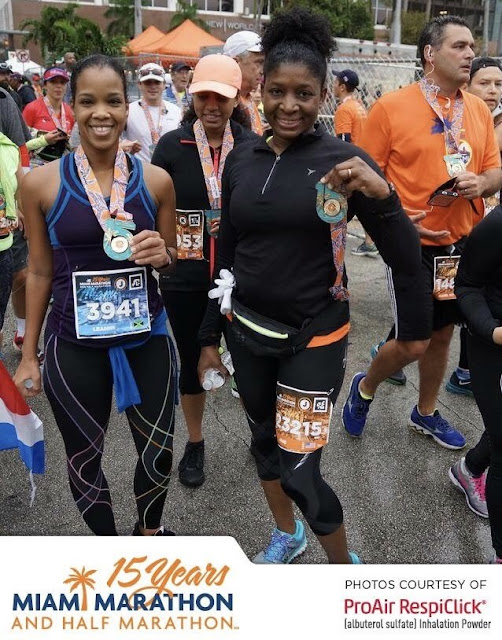 (some were official photos) 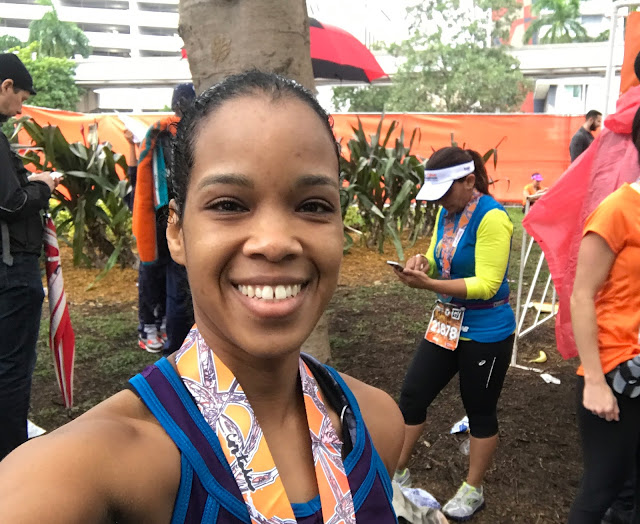 We were officially #MiamiFamous Half Marathon finishers 😎... 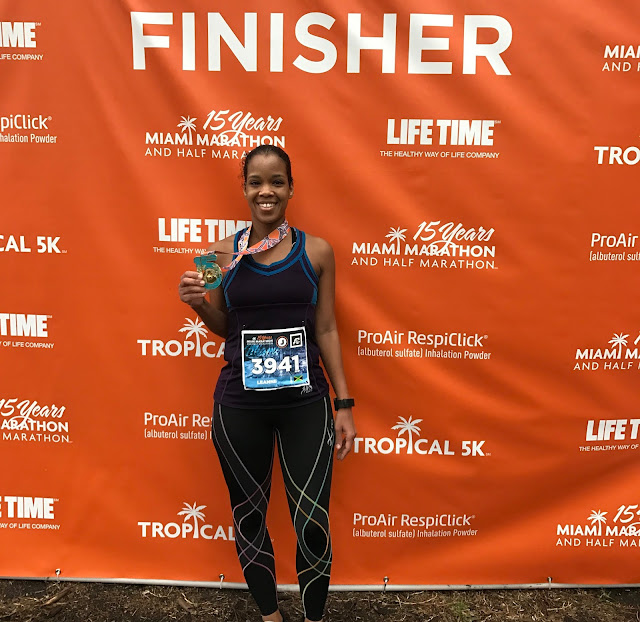 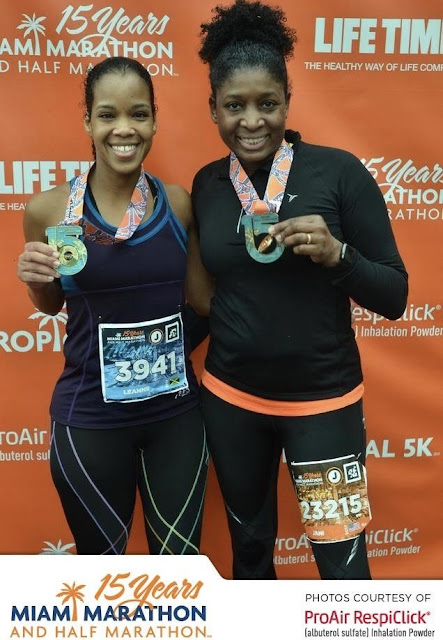 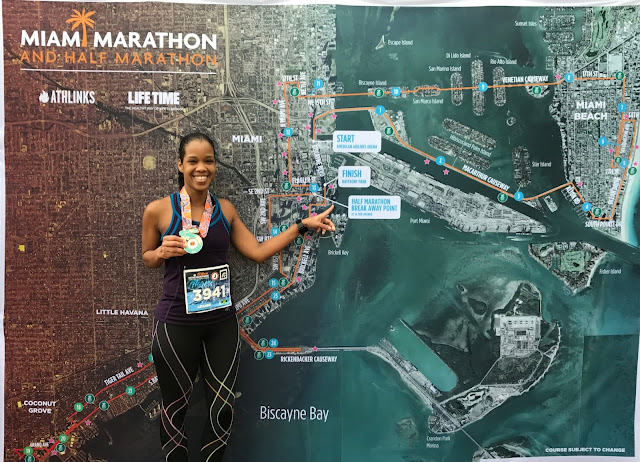 After the picture taking was complete, Jani and I went in search of food and then made our way back to the car to warm up. We sat in the car with the heat blasting for about 10-15 minutes until my fingers were thawed enough to drive. The traffic leaving the arena was hectic initially, but soon we were on the highway and heading back home.

During the first few hours after the race there were some issues with the timing system. But I sent the organizers a message and they quickly reassured me they were aware of the situation and were actively working on it. They established an alternate system to view race results, but that alternate system wasn't correct either. Initially the timing system reported that I ran a 3:22:05 half marathon (15:26 min/mile pace). Then it reported a 2:33:52 full marathon (05:53 min/mile pace). Finally it was corrected on both systems to reflect my 2:33:52 half marathon (11:45 min/mile pace)...

The Miami Half Marathon is definitely one of my favorite races. Despite the weather challenges I had a great time this year celebrating their 15th anniversary... 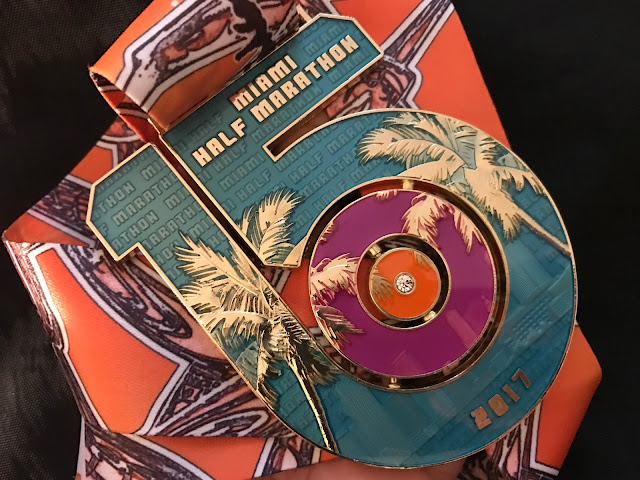 And I can't wait to celebrate their Sweet Sixteen with them in 2018...